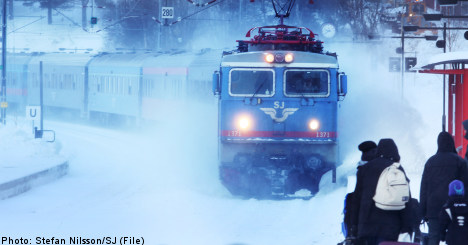 Train travel in Sweden has increased dramatically in recent years, while difficult winter weather has put the country’s rail system to the test, prime minister Fredrik Reinfeldt said during a Friday press conference.

“We think it’s been important to listen to the criticism that’s out there,” he said.

The new money will be used to improve operations and maintenance, as well as for additional investment and modifications to help outfit trains to better deal with winter conditions.

The 800 million kronor corresponds to an increase of 15 percent above current spending levels on Sweden’s rail system, according to the government.

“The 800 million which has been allocated will be allocated by the National Transport Administration (Trafikverket),” Liberal Party (Folkpartiet) leader Jan Björklund told reporters, emphasising that the spending would take place in 2011.

“Now it will be 6.1 billion,” he said, referring to the total amount.

The four leaders of the centre-right Alliance government parties appeared together in Stockholm’s Central Station to make the announcement – less than 24 hours after the station had been filled with thousands of passengers stranded due to a power outage, and following a winter which caused widespread problems for train travelers across the country.

Both individual passengers and businesses suffered due to delays caused by outages and other weather-related mechanical malfunctions, enterprise minister Maud Olofsson said, adding the problems translated into lost tax revenues for the state.

“The Malmbanan, for example, need more connections,” she said, referring to a 500 kilometre-long rail corridor across northern Sweden.

The line is a vital artery for transporting ore mined by state-owned mining company LKAB to ports in Luleå in northern Sweden to the Norwegian city of Narvik.

Specifically, the investment is meant to address three key issues, according to Olofsson: increased maintenance, increasing the flow of traffic, and increasing reinvestment in order to exchange aging equipment with newer equipment, and preferably not at the last second.

The problems with “a deregulated rail market without any controls” remain, according to Seko chair Janne Rudén.

“The railways have for too long been a laboratory for experiments in liberal market ideology and the only thing we’ve seen so far is poor punctuality, poor train maintenance, and a worsening of conditions for employees,” he said in a statement.

On Thursday the chair of national rail operator SJ, Ulf Adelsohn, was forced to leave his post. He used the occasion to deliver a stinging critique of how Sweden’s politicians have handled issues related to the country’s railways.

While he said the new allocation “can’t ever be anything other than good”, Adelsohn cautioned that the money wasn’t nearly enough, pointing out that the Transport Administration estimates that 20 to 25 billion kronor needs to be invested in the next decade to keep Sweden’s trains running properly.

“You have to look at it in relation to that, what the Transport Administration has said is needed to keep the railways in good condition,” Adelsohn told TT.

At the same time, the Social Democrats are demanding a moratorium on further railway deregulation and a change in mission for SJ.

Sweden’s ongoing deregulation of the railways, which is set to surge forward in 2012, must be stopped, according to the Social Democrats.

They highlight three countries which have attempted to deregulate their rail systems – the UK, New Zealand, and Estonia – and which have all experienced major problems along the way, forcing them to re-regulate their train systems.

Currently, SJ’s mandate is to operate trains and generate dividends of 10 percent. That’s not enough, the Social Democrats argue, believing the company should have a broader mandate with a wider impact on society.

Rather than focusing on producing income for the state, SJ should be seen as a basic social service, the Social Democrats content, arguing that the SJ’s corporate structure should be changed to make the broader mandate binding.