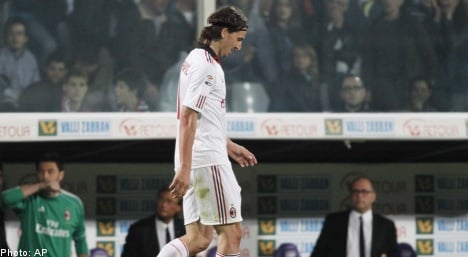 Ibrahimovic had only just returned from a two-game ban for striking Bari’s Marco Rossi in the ribs.

The 29-year-old was already facing a one-match ban having picked up a yellow card during the game, meaning he had earnt a suspension for an accumulation of cards over the season.

But later on he aimed a rant lined with expletives at a linesman after a throw-in decision went against him.

He was duly dismissed by the referee and walked off without protest.

However, afterwards he apologised and even insisted that he had not sworn at the linesman.

“I was angry because I’d lost the ball, I said a swear word to myself, not at the referee or linesman,” he said.

“I want to apologise, I walked off without creating a scene. I was looking at the linesman because he was in front of me but I wasn’t saying it to him.

“My team-mates would be right to be angry with me because I (was sent-off) while Fiorentina were attacking us.

“On top of that I was coming back from a suspension and it wasn’t the right time to get sent off.

“But can’t I get angry with myself without getting a red card?”

Ibrahimovic was dismissed with Milan holding onto a 2-1 lead and Fiorentina pushing forward for an equaliser.

The Swede somewhat unusually came to the post-match press conference to offer his apology, suggesting Milan had already moved into damage-limitation mode.

But having publicised his somewhat unlikely explanation that it was simply by chance that he was looking at the linesman while shouting insults, apparently to himself, Milan may be hoping for a reduced punishment.

If precedence is anything to go by, he should face at least a three-game ban, maybe four given he had already earned a one-game ban for his fifth yellow card.

However, he received the regulatory three-game ban for violent conduct when striking Rossi, only for Milan’s lawyer to successfully argue on appeal that his strike could have been simply intended to push Rossi away from the ball to give himself a better chance of winning it.

The ball was nowhere near him at the time and video evidence would have sufficed to ridicule that argument, but that didn’t happen and instead Ibrahimovic had one game knocked off his suspension, which was why he was able to play against Fiorentina.