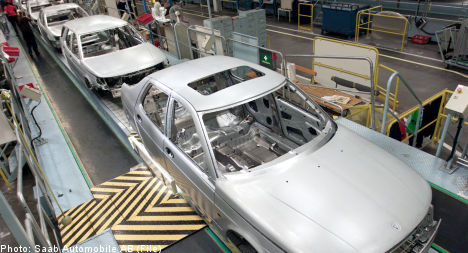 “Spyker and Saab Automobile are currently in discussion with several parties to secure additional short and medium-term funding for Saab Automobile,” the company said in a statement on Tuesday.

The firm confirmed that production will take around a week to resume even if the Swedish National Debt Office (Riksgälden) approves a plan to bolster cashflow by selling off Saab real estate.

The Local reported on Monday that Spyker had confirmed that it was in talks to sell off Saab properties in a bid to address cashflow problems which have left production at the firm’s Trollhättan factory at a standstill.

The firm announced that it intended to lease the properties back.

Amid speculation that Saab is on the verge of collapse, the firm sought to play down fears in its statement on Tuesday, describing the situation as a “short-term liquidity crunch”.

Spyker Cars stated that it expected to be able to give more detail of ongoing negotiations with the National Debt Office and other connect parties at the latest on Thursday.

Sweden’s National Debt Office has a say in Spyker’s business because it guaranteed a European Investment Bank (EIB) loan to Saab.

The announcement sent Spyker shares tumbling 4 percent on the Amsterdam stock exchange in early trading on Tuesday. The firm’s stock has thus now fallen more than 30 percent since mid-February.

Production had been halted three times in the previous week, but last week’s halt was the first time since Spyker bought Saab from US GM in January 2010 that the carmaker was forced to halt production without a set date for starting it up again.

Before being rescued at the last minute by Spyker, iconic Swedish carmaker Saab spent 20 years under US auto giant General Motors, during which time it did not turn a profit.