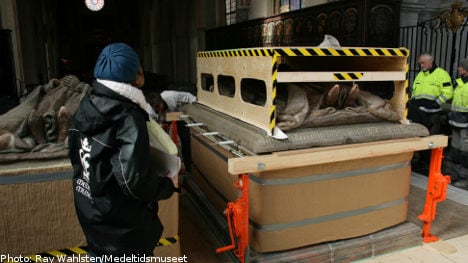 Magnus Ladulås is buried in Riddarholmen Church in central Stockholm and the identity of those accompanying him have long been a source of speculation, according to a report in the Dagens Nyheter daily.

“We know that his wife, a grandchild and a daughter are in there. We will now find out who the others are,” project-leader Maria Vretemark told the newspaper.

Work will continue over the coming three weeks to exhume the remains of the seven skeletons known to be in the grave and to perform DNA testing.

The remains will then be compared with tests taken from the grave of Magnus Ladulås’ father Birger Jarl who researchers believe is buried in Varnhem Abbey in western Sweden.

DNA tests carried out after opening the grave in 2002 enabled researchers to conclude with 65 percent certainty that the grave contained Birger Jarl and his son Erik, as well as a woman, thought to be the former king’s second wife Mechtild.

Magnus Ladulås’ grave has been opened on a previous occasion, in 1915, when it was concluded that his skeleton showed signs of sickness. It is hoped that modern techniques will be able to establish the exact cause of death.

Permission was granted to open Magnus Ladulås’ grave in 2010. The application was submitted in connection with the planning of the 800 year celebrations for Birger Jarl in 2010.

When researchers opened his grave in 2002 they were able to conclude that Jarl was in fact around ten years younger, having been born in 1210 and not in 1200 as was previously thought.

Birger Jarl played a pivotal role in the consolidation of Sweden and he led the Second Swedish Crusade which established control of Finland. He is traditionaly attributed to have founded the Swedish capital, Stockholm, around 1250.

Magnus Ladulås (Birgersson) was born in 1240 and reigned from 1275-90, succeeding his brother Valdemar, who he ousted from the throne with the help of the Danes.

Commonly known as Magnus III outside of Sweden, Magnus Ladulås is best remembered for laying the foundations of the Swedish nobility with the Ordinance of Alsnö in 1280.

The ordinance also confirmed the principle of “oath laws”, created by Birger Jarl, and which forbade, among other things, the kidnapping of women for wives.