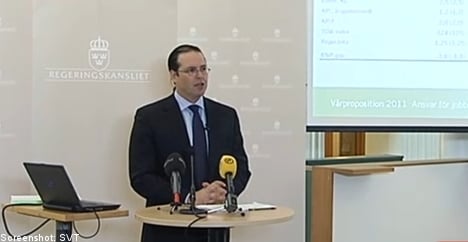 “In a situation when many other countries are experiencing austerity and weak economies, Sweden’s economy is growing stronger. We must use this to ensure that more people find work and that welfare initiatives can be implemented,” Borg said in a statement.

According to Borg, the expected budget surplus gives the government more scope for carrying out tax cuts and other reforms.

“We’ve come to the conclusion that there is room for reforms in the autumn budget bill,” said Borg.

He cautioned, however, that exactly how much room for reform may exist for the 2012 budget bill is hard to assess at the moment.

Borg emphasised, however, that “in a world that continues to be uncertain, with high levels of debt and large deficits” it’s important to pad the public purse with enough money to deal with the next economic crisis

“You have to keep your powder dry, you have to have some stored up,” he told reporters.

“Otherwise we end up in a situation where, if there is an acute economic crisis in Europe, we get dragged in by the uncertainty.”

“At the same time it is important in a world that continues to be uncertain, with high levels of debt and large deficits, that we build up a surplus to enable us to manage future crises assertively,” said Borg.

“One can say there has been a strong economic development in Sweden,” Borg said in a press conference.

Nevertheless, he warned that, despite the recent good times for the Swedish economy, risks remain and that it will take some time before the European Union’s fiscal problems are solved.

“The market worries we’ve experienced the last few months are, unfortunately, to stay with us,” said Borg.

He projected a “comparatively austere reality” and a “barren economic environment” in the coming years.

“This creates an obvious, future risk for a small, export-dependent country,” he said.

According to the government, the primary aim of its fiscal policy is to achieve full employment and reduce social exclusion.

Unemployment is expected to drop to five percent by 2014, which would be the lowest figure in Sweden since 1991.

However, the government remains concerned that the ranks of Sweden’s long-term unemployed have swelled. According to the government, there are problems in ensuring that job seekers are in fact ready to enter the market.

Borg explained further that bringing down unemployment to levels included in the government’s projections without increasing inflation or putting public finances at risk would be a challenge.

“This creates entirely new demands on how the labour market works,” said Borg.

Among other things, young people must enter the job market faster and integration must be improved.

“It’s also about people staying in the job market to an extent we’ve never seen before,” said Borg.

In 2015, equilibrium unemployment is expected to be around 5 percent, while the structural reforms to be carried out are expected to boost the ranks of Sweden’s employed by 215,000, according to the finance ministry.

Sweden’s national debt is expected to climb to 30.6 percent of GDP in 2011 before falling to 27.1 percent next year.

By 2015, Sweden’s debt is forecast to drop down to 12.5 percent, according to government projections.

Other risks to the government’s forecast include household debt and increased housing prices.

And while there is less risk that the global economic recovery will slow because of market worries, developments in North Africa and the Middle East, as well as the earthquake, tsunami, and nuclear accident in Japan could all dampen global economic growth.