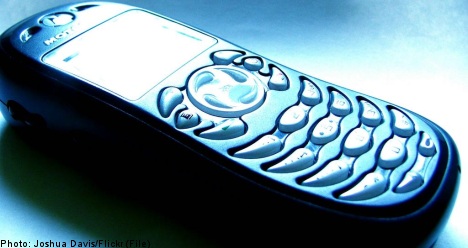 The fifteen-year-old girl was wearing a hooded sweatshirt and was speaking into her headset.

When questioned, she claimed that she didn’t hear the teacher mention mobile phones until he hit her on the shoulder.

According to local paper Nya Wermlands-Tidningen (NWT), the incident left the girl with a large bruise that kept smarting for a week. The redness didn’t subside until two days after the encounter.

The teacher’s side of the story is different, however.

He claimed to have asked the girl to hang up her phone, and when he saw her sitting hunched over he thought she was upset. When he went over to check if she was OK, he tripped and stumbled into her, he said.

According to NWT, other students who were sitting nearby said that they heard a commotion and saw the girl get upset and shocked by what happened.

They stayed after class and confronted the teacher, who claimed to have been ‘goofing around’. He then called the girl and apologised.

The rules on mobile phone usage during school hours in Sweden are not regulated in the education statutes. Instead it is up to schools to make their own rules.

Guidelines from the Swedish National Agency for Education (Skolverket) from 2007 state that students shouldn’t be allowed any object that may disturb the class.

A mobile phone that is turned off does not in itself constitute a disturbance but if the student is texting, taking photographs, surfing the net or doing anything else that may disturb the teacher or the other students it is grounds for removing the phone from the student.

However, teachers are not allowed to frisk students, and can’t remove objects that students are wearing.

If a student has a phone or an mp3-player in his or her pocket, the teacher has to ask the student to hand it over.

One way to get around it is to ask the students for any potentially disturbing objects prior to the beginning of class.

According to Maria Lönn of the Agency, questions regarding cell phones crop up every now and then. The guidelines from 2007 are getting outdated and could do with an update.

“Schools are supposed to be able to ensure peace and quiet for students during class, but it is understandable that it isn’t always that easy knowing how to go about it when it isn’t regulated in the statutes,” she said to The Local.

The Arvika teacher claimed to have warned the class that any mobile phones found in use would be confiscated.

However, according to NWT, the district court ruled that after looking at photographic evidence there was no mistaking that the girl had suffered pain.

No one had seen the teacher trip and stumble.

The teacher was sentenced to pay a fine, as well as 5,000 kronor ($799) in damages to the girl and 500 kronor compensation for pain and suffering.