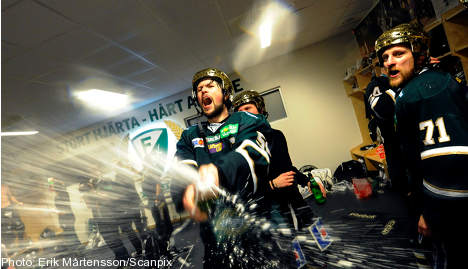 Färjestad, based in Karlstad in central Sweden, had little trouble regaining the Eliteserien title, which it last won in 2009, dispensing their challengers from northern Sweden in the fifth game of the best-of-seven championship series.

“This is the best there is,” Färjestad team captain Rickard Wallin told the TT news agency following his team’s victory, before waving his arms to the elated hometown fans.

“You just can’t miss chances like this. We really had an amazing team.”

Färjestad jumped to an early lead in the first period after a shot fired by defenceman Magnus Nygren found then net after ricocheting off a Skellefteå defender and past goalie Andreas Hadelöv.

Färjestad never looked back, and when Pelle Prestberg found the net early in the third period to give his team a commanding three-goal league, there was little doubt that Färjestad’s ninth Eliteserien title was close at hand.

The win was sweet revenge for the squad from Karlstad, which had been knocked out of the Eliteserien playoffs in the quarterfinals last season by underdogs Skellefteå, dashing Färjestad’s hopes of a championship repeat.

And while they had to wait a year to hoist the championship trophy once again, Thursday night’s victory was no less sweet.

“It feels awesome!”, forward Per Åslund told the team’s official website, adding he looked forward to celebrating yet another title.

“It’s going to be totally insane, just as it should be.”