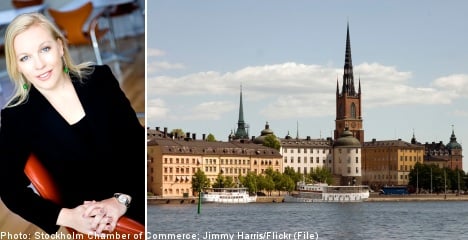 The Swedish state is earning more and more money from the roughly 2 million people who live in Stockholm County, who in 2010 were responsible for about half of all direct taxes paid into state coffers, statistics published on Monday by the Stockholm Chamber of Commerce (Stockholms handelskammare) show.

In the last ten years, the percentage of Swedish tax revenue coming from Stockholm has increased from 37.8 percent in 2000 to 50.2 percent in 2010.

However, Rankka added that more of the revenues generated by Stockholm residents, who represent about 20 percent of Sweden’s total population, should remain in the county rather than being distributed to the rest of the country.

The city is important for Sweden, and the need for further investment remains large.

“The most important thing is to fix the dysfunctional housing market,” she told the newspaper.

“The housing situation is a threat to continued growth and requires a series of measures.”

The Chamber of Commerce forecasts Stockholm will account for 40 percent of the country’s economic growth in the future, thus giving the city a key role for continued growth in Sweden.