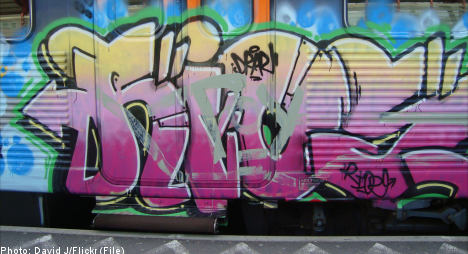 SJ had applied for an exception from the rule in the Data Protection Act which stipulates that only public authorities have the right to manage personal data relating to crimes and suspected crimes.

In its application SJ, which is a state-owned limited company, argued that the costs incurred for cleaning up graffiti and other vandalism are considerable.

Furthermore the firm argued that currently few of the cases are subject to legal proceedings and compensation claims are rarely successful. The lack of a means to collect information was cited as an underlying reason.

SJ plans to use its database to expedite police reports and also to identify preventative measures, such as increasing surveillance at rolling stock depots.

The database will contain images of the graffiti or vandalism, as well as incident information and costs incurred.

Personal details of suspects will not however be permitted to be included in the database.

The only information pertaining to the graffiti artist’s identity would thus be their initials or “tag” included in their handiwork.

SJ will be permitted to retain information in the database for up to two years or until such time as the matter has been dealt with by police and other authorities.