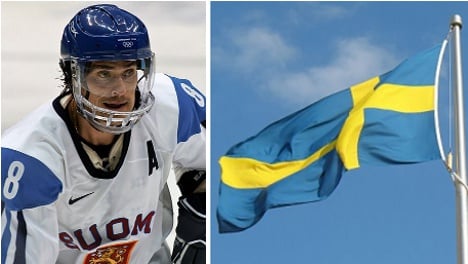 Namely, he has a tattoo of a Swedish flag just above his ankle.

Selänne, along with Saku Koivu and Jere Lehtinen, has been a backbone of Team Finland for most of his 120 match international career.

He is the all-time points leader in men’s Olympic hockey with 37 points in 31 games and has scored more than 600 career goals. Selänne’s prowess on the ice has elevated him to icon status in the hockey crazy Nordic country.

He is no less of a star in his adopted home of the Anaheim Ducks and the 40-year-old continues to impress – scoring two goals in a 4-3 loss to the Nashville Predators on Sunday in the NHL playoffs – in what many believe to be his last games for California outfit.

Speaking to the Orange County Register daily last week Selänne confirmed the widely circulating rumour that he has a tattoo of the Swedish “blue-yellow” flag adorning his right ankle.

The story began with a familiar tale of stag night high jinx, with Selänne blind-folded by his friends and dragged into a local tattoo studio.

The plan was to tattoo a Finnish flag but the tattoo artist became nervous in the presence of this ice skating deity and mixed up the colours of Finland’s bitter rivals across the Baltic sea.

“I was supposed to go back two weeks later to have it fixed,” Selänne told the Register. “But I never did. Some day I’ll go back and that guy will remember me.”

In the meantime “The Finnish Flash” is perhaps set to be become known as “The Swedish Flash” and his tattoo to pose as a poignant reminder of the bonds that tie these two Nordic neighbours together.