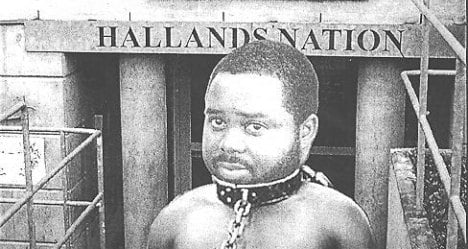 Jallow Momodou of the National Afro-Swedish Association (Afrosvenskarnas riksförbund) reported Halland and Helsingkrona student associations for failing to take action when guests who arrived at “jungle parties” showed up with blackened faces and ropes around their necks.

Following news of his complaint, Momodou arrived at his office at Malmö University on Wednesday morning to find posters on the library bulletin board featuring his face superimposed on the image of a naked man in chains.

Momodou, who had been alerted the night before that the posters may be circulating at the university, consulted the attending librarian.

He was told that a student had handed over a stock of similar posters on Tuesday night, which had apparently been printed out from the library computers.

While he was also angered by the posters Momodou said he isn’t surprised.

“For me it’s proof that racism really exists in Sweden and is on a level comparable to the southern United States in the 1970s,” he said.

Momodou has since reported the incident to the police.

And his supervisors and other high ranking officials at Malmö University all expressed their concern about the incident and promised to do what they could to ensure similar incidents didn’t occur in the future.

“I want to make fun of the fact that people get upset about something like this,” he told the newspaper.

At the time, Park was putting up copies of the poster in Lund.

He believes reaction to the “slave auction” has been blown out of proportion.

“Certain people are always offended. They have no sense of humour,” he said.

Park was arrested while putting up the posters and is suspected of doing so without a permit. However, prosecutors will also look into whether he may be charged with racial agitation, the Expressen newspaper reports.

Now that the creator of the posters has been identified, however, Momodou hopes that the promises of action to address the incident will be realised.

“I’m really hoping and expecting that the university and police will take responsibility and show that such actions will not be tolerated,” he said.

Momodou also lamented that no politicians had publicly condemned the “slave auction” incident, calling the lack of response “tragic”.

“I’m a Swedish citizen and there are lots of Afro-Swedes who feel attacked by this,” he said.

Momodou emphasised, however, that he wouldn’t back down in the face of racism.

“I will not be intimidated,” he said.

“If anything, this encourages me to keep fighting for my rights.”