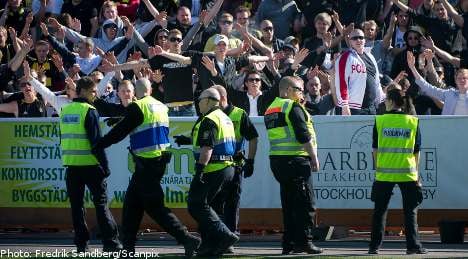 Violence broke out in the first half when referee Martin Strömbergsson sent off AIK’s Teteh Bangura for stamping on the opposition goalkeeper.The red card provoked violence from both sets of fans and objects rained onto the pitch, one of which caught Wärnmark on the head.

Match official Lars Wilhelmsson said, “He has definitely got tinnitus and will need to see a doctor. He still cannot hear properly.”

Once again hooliganism has cast an ugly shadow over the game here, although there are differing accounts of which set of fans actually threw the firework that hit Wärnmark.

According to Canal Plus there were about 20 objects thrown onto the pitch and Radiosporten sources claim that the firework which hit the referee came from the Syrianska fans.

AIK fans responded by raining fireworks and other objects at the home fans.

With Wärnmark taken away for treatment the players and officials were led off the pitch and after some 40 minutes of deliberating, it was decided the safest option would be to abandon the match.

Shortly afterwards, match referee Strömbergsson talked to the media and explained why the match was called off.

“It was due to the circumstances, quite simply and above all because the assistant referee received a blow just milimetres from his ear. He is in great pain. He has to go to hospital and for that reason we decided to call off the game”, he said, adding that Wärnmark is still badly shaken after the incident.

It is still unclear whether the game will be replayed and if so, when. At the time of the incident, Syrianska were leading 1-0.