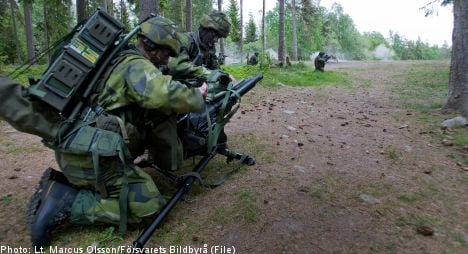 The number of items weighing down the Swedish soldier has grown considerably over the years, according to the report by the Swedish military, with almost every second officer now suffering pain due to modern kit requirements.

“It isn’t tough to carry a heavy burden, just stupid. But we’re trying to rationalize the gear as much as we can,” Andreas Davidsson of the Swedish Air Force Rangers said to Sveriges Radio (SR).

But however much they try to cut back, there is only so much you can eliminate and remain ready for all the eventualities of modern warfare.

According to news agency TT, the investigation carried out by the Swedish Armed Forces show that some soldiers are lugging about up to 80 kilograms of equipment.

Andreas Davidsson and his rangers aren’t the worst when it comes to over packing, but they still carry approximately 60 kilograms of equipment with them.

Most of the items are vital for military operations – weapons, protective gear, backpack, ammunition and grenades.

And the list of necessary kit just seems to increase with every campaign, Davidsson reported.

The average WWII soldier carried 25 kilogrammes of equipment, according to SR. During the Gulf War in the 1990’s the amount had almost doubled, and today some soldiers are carrying almost twice as much again.

The question is where it will end if the requirements on equipment continue to increase and Andreas Davidsson is concerned over the development.

“That’s just not possible. Carrying an extra 100 percent of your bodyweight is not progress,” he told SR.