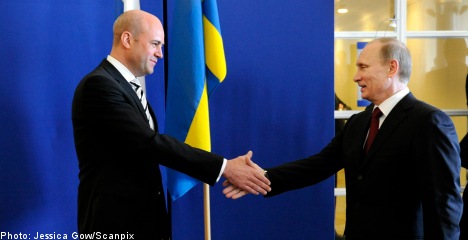 Putin arrived in Stockholm on Tuesday evening and following an early audience with King Carl XVI Gustaf, he met with Reinfeldt and Sweden’s foreign minister Carl Bildt on Wednesday morning.

According to a Russian government statement prior to the visit, the Russian PM was in Stockholm to discuss cooperation in the Barents Sea and the Arctic and within high-tech.

Both leaders emphasised the importance of economic cooperation between the two countries in a press conference after the meeting.

“We have significant possibilities for cooperation within forestry,” Putin said, adding that he expects both Scania and Volvo to expand its operations in Russia.

Putin went on to speak about an expanded cooperation within energy technology and to announced that visas for Swedes visiting Russia would be eased.

“We have reached a decision that our partners shall be able to visit Russia visa free,” he said.

The visa waver will apply to travellers on ferry routes to St.Petersburg on visits of up to 72 hours. The regulations will however not be apply to Russian citizens looking to visit Sweden.

Fredrik Reinfeldt pointed out that Sweden has no possibility to agree visa waivers with countries outside of the Schengen area.

Putin and Reinfeldt are reported to have discussed topics including the cooperation around the Arctic and Barents Sea and plans by Russian leaders to modernize Russian society.

It has also been reported in the Swedish media that the issue of human rights abuses and restrictions on freedom of speech and the press will also be topics for discussion.

Putin has brought with him a industrial delegation, headed by oil-and-mineral billionaire Viktor Vekselberg.

Vekselberg manages the building and investment project Skolkovo on the outskirts of Moscow where Russia is creating its own ‘Silicon Valley’.

The Russian government has earmarked around $6.5 billion to finance the project.

While Putin is in Sweden, Swedish electronics giant Ericsson is expected to sign a deal on a new research centre outside Moscow, with Fredrik Reinfeldt present at the signing of the contracts.

The visit is Vladimir Putin’s first since 2001 when he visited Sweden in 2001 as Russian president and is a response to Fredrik Reinfeldt’s visit to Moscow last spring.