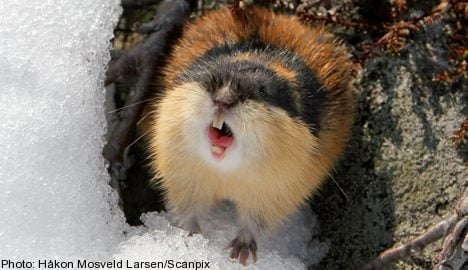 Swedish lemmings 'no risk for public' according to expert

“I must have seen a thousand just since Saturday. They are absolutely everywhere. They are swimming about in the lake close to our house, they jump on the ice floes, and they scurry around the outside of our house,“ said holiday-maker Magnus Lundberg, to the local Östersundsposten (ÖP) daily.

Road users are reportedly struggling to avoid the advancing lemming hordes with many of the small furry animals ending up as road kill in what has been described as a real massacre on the roads.

However, Sweden’s pets and wild animals alike stand to gain as the lemming-strewn roads present a veritable feast for hungry predators.

Favourable weather has created the conditions for 2011 to become what Swedes call “a real lemming year”.

According to Birger Hörnfeldt, of the department of wildlife, fish and environmental studies at the Swedish University of Agricultural Sciences in Umeå, these traditionally occur every 3-4 years.

But the last three decades have seen such unfavourable weather that the number of lemmings had diminished considerably.

If winters are too clement, the little rodents are forced up from under the snow-clad ground too soon and perish.

But the last two winters have been cold enough for lemmings to stay under their blanket of snow and subsequently the stock has grown.

“It started with a ‘rodent-boom’ in the autumn and then we had a very cold winter. The reason we see them now is that we have just had a heat wave. That forces them out,” Hörnfeldt told ÖP.

Lemmings have traditionally been believed to undertake the occasional mass exodus, sometimes to meet their death by following each other off a cliff.

However, today this kind of migration behaviour is believed by experts to be a myth based on lies or at least highly exaggerated.

According to Bengt Landström of the mountain unit at the County Administrative Board in Norrbotten, this may well be a record year for lemmings, but he does not believe in a bona fide ‘lemming exodus’, where the lemmings blindly follow one another to their death.

“No, that kind of lemming migration is just a fairy tale, a tall story,“ he told local paper Piteå Tidningen.

Unfortunately, exodus or no exodus, the move from the mountaintops often means that the little rodents go to their death.

If they are not hit by cars wild or domestic animals are very keen to get their paws on them.

“Our dogs are eating the lemmings while we are out walking. It is not much we can do about it. The dogs just bite down on them, throw them up in the air and then swallow them almost whole. They probably devour between five and ten a day,” Magnus Lundberg told ÖP.

The animals are often seen as aggressive little creatures but Birger Hörnfeldt sees no reason for the public to fear lemmings, should one sneak up on them unawares.

“If they seem ill-tempered it is only defensive behaviour, they’ll probably not do much more than hiss,” Hörnfeldt told ÖP.