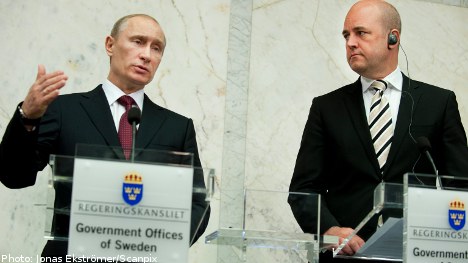 force in international relations. I am stupefied,” Putin said at a news conference in Stockholm alongside Swedish Prime Minister Fredrik Reinfeldt.

in our modern society. Don’t you think that there is a big contradiction between the speeches, the words, and the practice of international relations?” he said.

“We must do everything to eliminate this imbalance,” he said.

Putin explained his stance was based on what he learned during his time as a Soviet-era KGB intelligence officer.

“One of my friends in Afghanistan headed a KGB group,” he told reporters.

“One day, he came home for a holiday and I asked ‘so Sasha, how is it over there?’,” Putin continued, pointing out that at the time, the attitude was “very patriotic, we thought we did good by fighting the war in Afghanistan.”

“And he said, ‘you know, not one bombing takes place without my signature. And I measure my success by the number of bombings I haven’t signed off on’ … And then he added ‘Do you know how many civilians die in those bombings?’,” Putin recalled.

That conversation, “for me, was a shock. Just think, at the time, hearing that from a KGB officer!” he concluded.

Moscow has increasingly criticised the international coalition for the air strikes on Libya in the past few weeks, insisting they have gone beyond the UN mandate.

Russia, a veto-wielding member of the UN Security Council, abstained from voting on Resolution 1973 in March, allowing it to pass and making possible the onset of the aerial bombing campaign.

The resolution does not allow for intervention on land.

Sweden, which is not a member of NATO, pledged eight fighter jets and a transport plane to the mission, which enjoys broad popular support in the Scandinavian country, but its planes are only used for surveillance and do not take part in ground strikes.