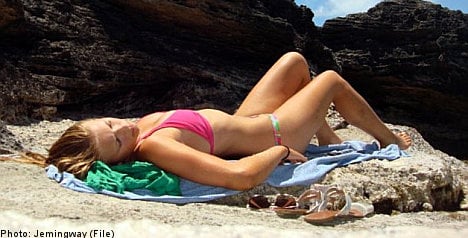 This beach tester is not the one mentioned in the article

“It‘s unbelieavable, really. I am going to get paid for going on a dream vacation”, Dejus told The Local.

After women’s lifestyle magazine Amelia posted the advertisement seeking a “beach tester” (strandtestare) with the Swedish National Public Employment Service (Arbetsförmedlingen) at the end of March, the editor received hundreds of applications within the first few hours.

“The response has been huge,” Amelia’s editor-in-chief, Åsa Lundegård, told The Local at the time.

After writing about the advertisement, The Local’s editor David Landes also received several queries regarding the position.

“On the one hand I wasn’t surprised that people would be interested in applying for this kind of job but on the other, I was bemused by so many contacting us about it,” said Landes.

The job ad only ran for a few days, and its publication the day before April 1st led many to suspect it was an April Fool’s joke, according to Lundegård.

Åsa Dejus applied to Amelia despite being convinced that it was a joke.

“I submitted the application despite being absolutely certain that I would read in the magazine the next day that ‘so-and-so many people fell for the joke’,” Dejus said.

When she found out that she had got the beach bum job she was attending at a seminar on poverty.

“It was such a contrast, I was sitting there dealing with poverty issues and found out I had got one of the coolest jobs ever. When I left the seminar I phoned my sister and just shouted out my joy,” she said.

According to the advert, candidates were expected to spend four weeks testing beaches in four different locations around the globe.

“Included in the job assignment is going on outings, lying on beach chairs, drinking wine in local taverns, and other ordinary assignments found in a commercial beach and tourist environment,” read the ad.

“In certain areas, receiving a full-body massage, testing drinks, snorkeling, and book reading may be required.”

Candidates had to be able to swim, be willing to work late nights (“testing drinks can under certain circumstances require working overtime”), as well as “have the capacity to rest/do nothing for long periods of time”.

In addition to grueling days on the beach and top flight accommodations, Amelia’s “beach tester” would also be expected to blog about their experience.

Dejus hopes she was selected because her application reflected an ability to do justice to the destinations she will cover.

“I am hoping my background in peace and conflict studies will enable me to combine more traditional travel reporting with a reflection of the ‘real’ societies that I will be visiting,” Dejus said.

According to her, the first destination will be somewhere in the Mediterranean this summer, followed by Miami, Singapore and Rio de Janeiro in the autumn and winter.

Dejus was surprised to hear of the queries and the interest that The Local received from readers all over the world since writing about Amelia’s beach bum ad.

“I can only hope that my blog will give them a feeling of being there with me and inspire them to travel themselves,” she told The Local.