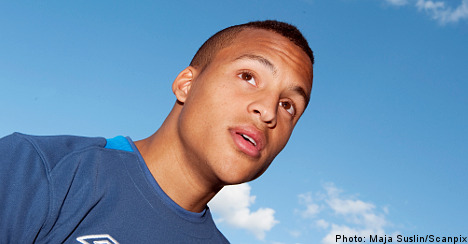 Never a prolific goalscorer since joining the club five years ago, the 22-year-old Olsson was the hero with a first-half goal that eased the pressure on beleaguered boss Steve Kean.

It was Rovers’ first win in 11 league games stretching back to January.

After an edgy start, the home side dominated and ultimately deserved their victory on a tense afternoon at Ewood Park.

But Rovers made hard work of it by missing a series of chances to kill the game off in the second-half and Bolton, though below their best, were always capable of nicking an equaliser.

Bolton fans taunted Rovers supporters with cries of ‘You should have kept Big Sam’ — a reference to the former Wanderers manager controversially sacked by Blackburn’s Indian owners last December.

It generated some sympathetic applause from the Ewood faithful, who had watched their team slide into relegation trouble on the back of a 10-match winless run.

But the mood almost changed when Olsson’s fierce shot was saved by Adam Bogdan before the Bolton ‘keeper scooped the loose ball away as Mwaruwari Benjani tried to bundle it over the line.

Blackburn’s luck was in again when Moreno beat Robinson for a second time only to see his shot smack an upright.

But it was Olsson who made the breakthough after 20 minutes. Goals from the Swede have been as rare as hen’s teeth since he joined Rovers in 2006 and his only other Premier League strike this season was against Liverpool in January.

Olsson took Michel Salgado’s pass and glided past David Wheater before toe-ending his shot into the bottom corner of the net from 16 yards.

Bogdan ought to have kept it out, but the Hungarian — making his first Premier League appearance since last September – redeemed himself four minutes later when he prevented Olsson adding a second.

The Rovers man was again allowed far too much space, but Bogdan smothered his close-range shot.

The home side continued to press and Benjani wasted a chance after being teed up by Olsson before he was replaced by Nikola Kalinic.

Bolton skipper Kevin Davies endured a frustrating afternoon, starved of service and easily kept in check by the Blackburn defence, and was finally booked for raising his arm in a heading challenge with Phil Jones which left the Rovers man clutching his face.

Jones almost had his revenge when his long free-kick forward was midjudged by Bogdan and met by Steven Nzonzi but his header drifted wide.

Rovers wasted a simple chance to kill the game off nine minutes from time when defender Chris Samba miskicked substitute Morten Gamst Pedersen’s cross in front of goal. The ball ran kindly to Mame Diouf, but the substitute blazed over from ten yards.