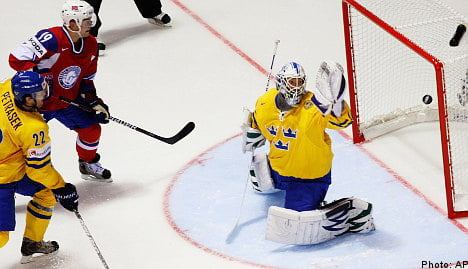 Norway battled back from two goals down to upset last year’s bronze medallists Sweden 5-4, winning a penalty shootout in the Scandinavian derby at Kosice.

The Swedes were leading the score 3-1 after the first period but in the second they allowed the Norwegians to level at 3-3 on two powerplays.

In the third,, the opponents traded goals preceding overtime which ended goalless. In the penalty shootout Norway scored twice to clinch the win while Sweden missed both of their attempts.

“We gave them a way to get into the game and let them score a couple of goals on chances we gave them,” Sweden’s Magnus Paajarvi told the tournament website.

“That gave them momentum, and instead of taking over the game, we let them dominate the second period.”

Norway’s captain Ole-Kristian Tollefsen was thrilled to finally get one over on his country’s illustrious neighbours.

“This is the best,” he told the International Ice Hockey Federation site. “I play in Sweden and know a lot of the guys. It’s a good rivalry.”

Sweden meet Austria in their next game on Monday, while Norway take on the United States.