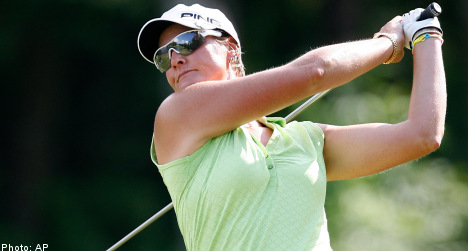 Hjorth posted a second-straight five-under par 67 for a 10-under total of 278.

She was two strokes in front of South Korean Kim Song-Hee, who carded a 71 for 280 on the Crossings course.

Thompson, meanwhile, carded a fourth-round 78, settling for a tie for 19th place after starting the day tied for the lead with Kim.

Thompson, the 16-year-old who was trying to become the LPGA’s youngest ever winner, opened and closed her round with bogeys, and had double bogeys at 14 and 15 as she found the water at both holes.

South Korean Choi Na Yeon carded a 69 and Norway’s Suzann Pettersen shot a 70 to finish three back on 281.

The Swede’s seven birdies included four in a five-hole span from the third, a burst that saw her vault into the lead.

“I knew I just had to be patient,” Hjorth said.

“Obviously my goal going in I was trying to get double digits (under par), which is pretty hard to do. I didn’t think it was going to be enough for a win, but obviously it was.”

She watched as Kim’s approach at 18 found a bunker, then let herself celebrate.

“She could have holed out her shot,” Hjorth said.

“It wasn’t until she hit her second shot that I knew I was going to win the tournament.”

The South Korean had narrowed the gap with an eagle on the par-five 16th.

“I knew she was 10 under through like 14 but I didn’t look at the scoreboard after I had an eagle,” Kim said.

“I was just kind of playing my game.”

Despite her disappointment, Thompson will likely have more chances to become the LPGA’s youngest winner.

She still has nearly two years to top Marlene Hagge, who was 18 years, 14 days when she won the 18-hole Sarasota Open.

Hjorth advised Thompson not to dwell on the negative.

“I just hope that she learns things from it,” Hjorth said.

“That’s the important thing. She’s going to be a great player and have a lot of wins and a lot of success.”