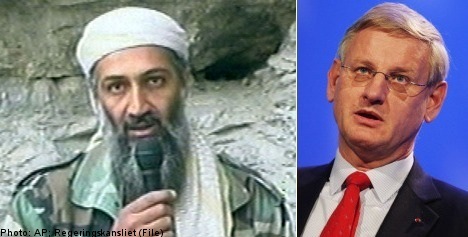 “That a world without Osama bin Ladin and the hate he preached and encouraged is a better world, is without a shadow of a doubt,” Carl Bildt wrote on his blog on Monday morning.

Bildt was writing at London Heathrow Airport in transit from the US where he had spent a few days in Washington meeting with, among others, the US Secretary of State Hilary Clinton.

US president Barack Obama announced the news late Sunday night Washington time that Osama bin Ladin, almost ten years after he masterminded the 9/11 attacks on New York City, had been killed in a US led operation.

In an address to the nation, Obama said Bin Ladin was killed by US special forces in Abbottabad, a highland town north of the Pakistani capital of Islamabad on Sunday.

He also confirmed that bin Ladin’s body was in the possession of the US.

Carl Bildt was among the observers who argued that the impact of the death of the al-Qaeda leader and the world’s most wanted man since the World Trade Center attacks that killed almost 3,000 people.

Swedish terrorism expert Magnus Ranstorp argued on Monday that the death could have significant internal consequences in Pakistan but argued that the removal of the al-Qaeda figurehead meant little to the overall war on terror.

“The sacred cow has been that if bin Ladin were to be captured, he couldn’t be captured alive and definitely not in Pakistan,” Ranstorp told the Dagens Nyheter daily on Monday.

President Obama hailed the mission as a triumph for US foreign policy and observers raised questions over the timetable for a withdrawal from Afghanistan.

“But all it takes is a new terror attack, and then it is back to square one,” said Magnus Ranstorp.

The US Department of State has meanwhile issued a worldwide travel alert for “the enhanced potential for anti-American violence given recent counter-terrorism activity in Pakistan”.

Sweden is part of the Nato-led mission in Afghanistan and first deployed troops in the beginning of 2002. The country now has around 500 troops based near the northern city of Mazar-i-Sharif.

In December 2010 the parliament passed a government bill to extend the military mission in the country until the end of 2011, allowing for the deployment of up to 855 people.