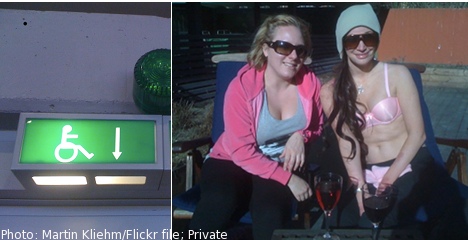 Nina Åberg and Katarina Morgner were told they were a 'menace to society'.

“At first we laughed, it was so ridiculous we thought it was a joke, but then we felt insulted. Neither one of us have been in a wheelchair for that long and after the depression that follows it is not especially nice to be told that you can’t go out and enjoy yourself,” Katarina Morgner told The Local.

Morgner and her friend Nina Åberg were planning a night on the tiles in Stockholm. But as they are both wheelchair bound and would have a problem getting up and down stairs they decided to text 118 100 to find out which nightclubs in Stockholm would be best to visit.

“We don’t think a nightclub is an appropriate environment for wheelchairs,” was the answer they received.

118 100 is a search engine, where customers on the internet and via telephone and text messages will be provided with “an answer to anything”.

“Our pleasant and capable information agents will give you that little extra something with a smile on their lips,” the website reads.

The reasoning behind the advice was in this case that lights are usually dimmed at a nightclub and that the wheelchairs could be a danger to the other guests.

“We reacted strongly to the fact that they thought we’d be a menace to society,“ Nina Åberg told newspaper Metro.

The 118 100 staff are advised never to answer in an “unpleasant, derogatory or offensive” manner.

CEO Mikael Benckert told Metro that the person answering the question tried to think about the answer but in the end just got it wrong.

“Maybe they should have tried giving suggestions of other premises where they could have socialised,” he told Metro.

He doesn’t think that the answer the two girls received was very well phrased.

“The best thing would have been just to answer their question,” he said when prompted by Metro.

Åberg and Morgner are planning to take the matter to the Equality Ombudsman (Diskrimineringsombudsmannen).

“What we want is that they look over who gets to work there. And that when on duty they really think about what they answer people, ” Morgner told The Local.

Other answers from 118 100 that have caused offence in the past included when a 13-year-old asked what he should be when he grew up and was told to take a shotgun into the jungle and end it all.

Another was when a 13-year old girl inquired after record companies and was told that she should give up the idea as she had a voice like a “creaking old tractor”, according to Metro.