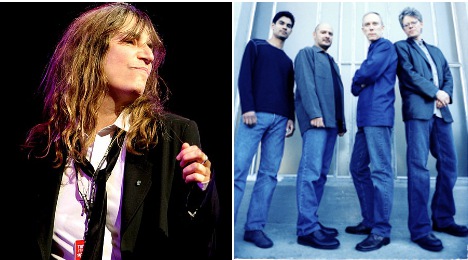 The winners will receive 1 million kronor ($165,000) each and formally accept the prize from Sweden’s King Carl XVI Gustaf at a ceremony in Stockholm on August 30th.

Smith was honoured for her devotion to “art in all its forms”, the organization said in a statement.

“Patti Smith has demonstrated how much rock’n’roll there is in poetry and how much poetry there is in rock’n’roll. Patti Smith is a Rimbaud with Marshall amps. She has transformed the way an entire generation looks, thinks and dreams,” the jury said.

“With her inimitable soul of an artist, Patti Smith proves over and over again that people have the power.”

Patti Smith was born in Chicago but moved to Philadelphia as a child. She started her career after moving to New York in 1967 when she began writing poetry.

Together with the guitarist Lenny Kaye, Smith began performing her texts and in 1975 she released her perhaps most influential album, Horses.

She has continued to perform and record albums over the following three decades, with her latest production, The Coral Sea, released in 2008. Her latest collection of poems, Just Kids, was published in 2010.

The Kronos Quartet were meanwhile lauded by the Polar Music Prize jury for “revolutionizing the potential of the string quartet genre” over their almost 40 year career.

“The same type of chamber music ensemble – two violins, a viola and a cello – for which Mozart and Beethoven wrote, can also be used to comment on international politics, interpret avant-garde rock and incorporate music from every corner of the world,” the jury said in a statement.

The Kronos Quartet are based in San Francisco and were formed in 1973 by David Harrington, who remains a member of the ensemble.

Over the course of their career the quartet has released some 40 albums with the latest release, UNIKO, coming in 2011.

The Polar Music Prize was founded in 1989 by the late Stig Anderson, the publisher, lyricist and manager of iconic Swedish pop group ABBA, and is given out to recognise artists’ contribution to music. The prize is typically shared by a pop artist and a classical musician.