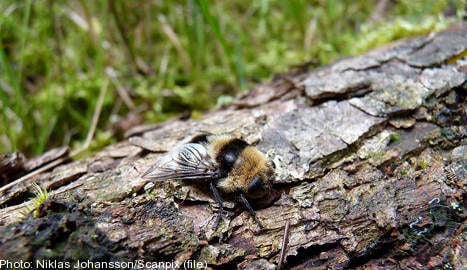 It may look like a bumble bee but really it is an elk bot fly.

“It was uncomfortable and hurt a bit,” said Malin Hallgren who had 30 eggs ejected into her eye by the insect.

Bot fly larvae is a parasite that mainly feeds on the mucus of elks and deer.

Up until recently the insect was only found in elks in the north of Sweden but it has now been detected as far south as Jönköping, in the county of Småland, south of Stockholm.

A full grown insect measures around two centimetres and looks a bit like a hairy fly or a bumble bee. After mating the female looks for an appropriate host for her offspring.

This is usually elks or deer, but sometimes, she will mistake human eyes for elk nostrils.

The pregnant female shoots her already hatched larvae at the host animal’s nostrils. The larvae travel into the nose where they feed on mucus.

From there the larvae wriggle down to the throat where they reach their third stage of development.

When the larvae reach about 4 centimetres their movements tickle the nose of the animal, which sneezes them out together with mucus and blood on to the ground where they then continue to the next stage in their development.

In an article in the Swedish medical paper Läkartidningen, professor of entomology Thomas G T Jaenson describes such an attack on a Swedish woman in a forest in central Sweden last autumn.

According to Jaenson, the fly was hovering close to the woman’s face and suddenly shot “several microscopic larvae” into one of her eyes.

About 30 whitish larvae were later removed from the eye, but she had a persistent feeling of “creeping larvae” in the eye and nose area.

The victims said it was like they were being "slapped in the face by a branch" while walking in the woods.

According to Jaenson, the larvae rarely, if ever, reach stage two in human hosts. But they will cause conjunctivitis in the eye, with symptoms such as a stinging or burning sensation, increased tear flow and an aversion to light.

If the larvae are not removed they will attach themselves to the cornea and the eyelid. If one was to penetrate into the eye the damage could potentially be extensive.

Jaenson’s advice to members of the public who enjoy walking in the woods is to immediately swat away any bumble bee-like insects that seem to hover in front of the face.

“Otherwise there is a risk of getting small larvae shot at one of your eyes, “ he wrote.