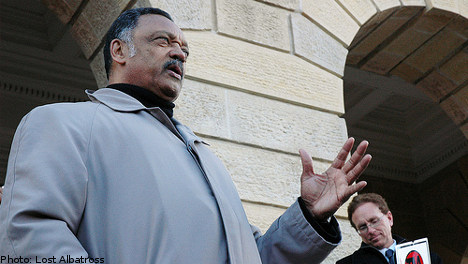 “About a week ago a racist spectacle was held at one of your most respected institutions,” Jackson wrote in a letter to Swedish minister for education Jan Björklund.

Jackson urged Sweden to have the perpetrators questioned and take measures to ensure that Swedes are made aware of the brutal reality of the transatlantic slave trade and the part Sweden played in it.

It was in April that two student associations at Lund University in southern Sweden were reported for hate speech after a party featuring the sale of “slaves” complete with blackened faces and ropes around their necks.

The incident further escalated after Jallow Momodou, the member of the National Afro-Swedish Association (Afrosvenskarnas riksförbund) who reported the two affiliated student associations, became subjected to racial slurs and posters featuring his face superimposed on the image of a naked man in chains.

The European Network Against Racism (ENAR) based in Brussels, later wrote an open letter to Sweden’s Minister for Democracy and European Affairs Birgitta Olsson expressing its utter disgust at the incident in Lund.

The organisation requested that the Swedish government take action to identify and prosecute the perpetrators.

Kitimbwa Sabuni, chairperson of the The National Afro-Swedish Association is happy with the support from the well-known civil rights activist Jackson.

“This incident has sent shockwaves all over the world. People are surprised that there have been no consequences in Sweden,” Sabuni told Swedish daily Aftonbladet’s blog Politikerkollen.

According to the Aftonbladet blog, the letter, which was sent by post to Sweden, has yet to reach minister for education Jan Björklund.

Björklund has so far declined to comment on the matter until he has read the missive from Jackson himself.