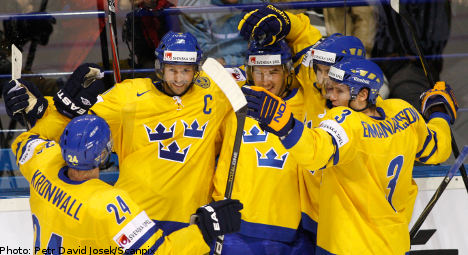 Both teams had already qualified for the next round but they didn’t let that affect them in a no-holds barred contest.

St Louis Blues Patrick Berglund put Sweden 1-0 up with 2:29 before the first break firing home with a powerful slap shot but Cam Fowler of Anaheim Ducks levelled just 1:12 later with a powerplay goal.

Marcus Kruger of Chicago Blackhawks restored the Swedes lead 3:17 into the

Berglund scored his second of the match with 4:44 remaining before the second intermission to give the Swedes a comfortable 4-1 lead.

Elsewhere Reigning world champions Czech Republic made it three wins in as many matches as they beat Finland 2-1 in their Group D match.

Milan Michalek put the Czechs into the lead 4:24 into the second firing in past Finland ‘keeper Petri Vehanen from Marek Zidlicky’s precise feeding pass.

The holders resisted a string of Finns’ attacks before the 38-year-old veteran Jaromir Jagr netted the Czech team’s second and his first goal at the tournament 2:48 into the third wristing the puck under the crossbar from close range.

In the other key match in Group D, Mads Christensen was Denmark’s hero on Wednesday scoring the shootout-winning goal after two goals in regular time to put his team into the qualifying round with a tight 3-2 win over Latvia.

The Danes, who performed well last year reaching the quarter-finals, looked less impressive at Bratislava losing both of their previous Group D matches.

But on Wednesday they were much more focused with Christiansen putting the Danish side into the lead twice. However, the Latvians, who also desperately needed to win equalised on both occasions through Martins Cipulis and Jekabs Redlihs.

After a goalless overtime the opponents got the winner in a penalty shootout. Christensen was the only player in the series, who managed to score sending Latvia into the relegation group.

“We’re missing seven or eight players from last year’s line-up,” Danish manager Per Backman said. “Considering that, this may be an even bigger feat than last year’s quarter-final.”

In the early Group C match at Kosice Norway also booked their ticket into the qualifying round with a confident 5-0 win over just-promoted Austria, who will now have to battle for survival along with Slovenia and Belarus.