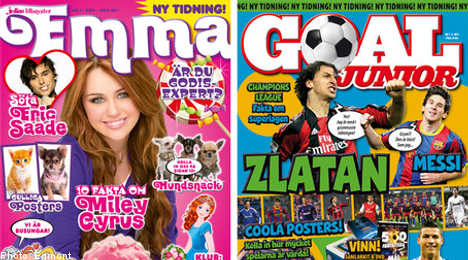 'Emma' for girls and 'Goal junior' for boys, according to an Egmont statement

Emma, the magazine aimed at girls, was described by publisher Egmont in a statement prior to the launch as a ‘lively, fun, and activating magazine for girls 6-9 years of age’.

The magazine features facts that publisher Egmont Kärnan deems suitable for their target audience, such as celebrities, baking, and arts and crafts.

The other magazine Goal Junior is described as ‘a cool football mag, where facts are presented in a cheeky and explosive way, which is guaranteed to appeal to younger football crazy boys’.

Goal Junior has only got images of male players, and the only female in the entire magazine is a cartoon, which features an angry mother.

The magazines have sparked up an internet storm, and on Thursday a campaign kicked off called ‘Stop limiting our children’ where almost 2000 people had signed an online petition against the publications by Friday afternoon.

Swedish author Karin Salmson is one of the instigators, and she says that one of the aims of the campaign is to make a stand and show that this is a bad idea by Egmont.

“It is a strange signal for kids to make a football magazine only aimed at boys and only featuring male footballers. A third of Sweden’s football-playing youth are girls,“ Salmson told daily Svenska Dagbladet (SvD).

The campaigners feel that boys who like arts and crafts should feel included in a magazine that writes about such things, and that girls who like football should feel the same about a football magazine.

And on the internet the debate continued on Friday afternoon.

“If Egmont would just go bust as an effect of their gender oppressive magazines, I would retain my belief in the human race,” another commented.

But not everyone agreed with the criticism against the publisher.

“I don’t get it. Egmont does their research, develops a product suited to the target audience and now everyone is criticising them? That is entrepreneurship 101,” one tweeter said in the publisher’s defence.

“I can’t believe everyone is complaining to Egmont about this. If you don’t want kids to be affected by the magazines just don’t buy them,” another agreed.

Karin Salmson, however, wants the publisher to show corporate social responsibility and change the magazines so that they include everyone – or alternatively to discontinue them.

Regardless of what the ‘unfortunate choice of words’ in the press release stated at the launch.

“We certainly don’t want to exclude any reader. That would be stupid for a publishing house. We want as many readers as possible,” Linda Nehlstedt, business area manager at Egmont Kärnan, told newspaper Sydsvenskan.

According to Nehlstedt the magazines are the results of focus-group based research that Egmont has carried out with kids and parents.

Despite the campaign and the debate that is raging in Swedish media and on the internet, Egmont Kärnan has no intention of discontinuing or changing the magazines.

“We will do no such thing. Emma hit the shops yesterday and Goal Junior is being printed, Nehlstedt said to SvD on Friday.