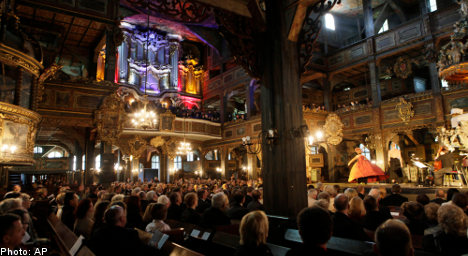 request of the royal couple who wanted at last to see the church built in large part with funds from the Swedish monarchy more than three centuries ago,” Pytel added of the royal visit during which Queen Silvia accompanied the king.

The construction of the Lutheran evangelical church in Swidnica along with two other protestant church was permitted in Roman Catholic areas after the 1648 Peace of Westphalia ending the Thirty Years’ War in what was then the Holy Roman Empire.

The church itself was intended to symbolise the end of the war and religious conflict between Catholics and Protestants.

The house of worship in Swidnica, which has the capacity to hold 7,500 people, is also regarded as the world’s largest wooden church, Pytel said.

The Swedish royals ended their three-day visit to Poland Friday.