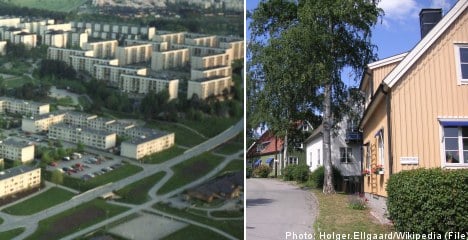 Of Sweden’s 100 wealthiest areas, 96 are located in Stockholm County, according to new figures from Statistics Sweden (SCB) and compiled at the request of Sveriges Radio (SR).

In addition, 21 of the 100 poorest areas are also located in and around the Swedish capital.

The income difference between the poorest and wealthiest areas has also increased.

Meanwhile, monthly incomes only increased by an average of 2,000 kronor in Sweden’s 100 poorest areas during the same time period.

“Firstly, societal divisions have increased. That leads to an increase in housing segregation,” Bo Malmberg, a professor of cultural geography at Stockholm University, told SR.

“Where you see this most clearly is in the big cities like Stockolm; that’s where the high earners go. And the reason is that it’s here where the market is largest and you can earn really big money.”

According to Malmberg, the rich have a “strong tendency to stick together”, leading them to live in the midst of other wealthy residents.

Twenty of Sweden’s 100 wealthiest postal codes can be found in the Stockholm suburb of Bromma where most residents between 30 and 64-years-old earn around 50,000 kronor per month.

According to Bromma estate agent Mikael All, it’s “not possible” to buy a family home for less than 9 million kronor.