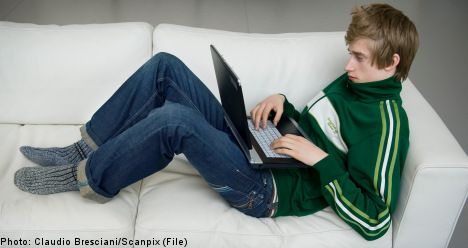 “This is a danger to the whole Swedish learning society,” Monica Rosén, professor of pedagogics at the Gothenburg University, told The Local.

Rosén has been studying the reading habits of Swedish nine and ten-year olds over the last twenty years.

The study shows that results of reading tests for students in year four in the Swedish primary school (grundskola) are looking increasingly more like those of year three results from twenty years ago.

According to Rosén, one of the reasons for this is that when children reach the age when they traditionally read the most (9-12) many today choose computer games over books.

“It isn’t so much that the interest in reading is dwindling, but rather that leisure time activities have changed over the years,” Rosén told The Local.

The decrease is most noticeable among boys; a fact that Rosén thinks is reflected in boys traditionally being at the forefront of screen-based activities. But, she points out, girls are not far behind.

According to Rosén, boosting reading skills is important for Sweden not in the least if the country wants to be able to compete internationally.

“We have gone from a top position compared to other countries to a middling one,” Rosén told newspaper Metro.

Not being good at taking in textual information also makes learning other subjects like maths or science more difficult.

Rosén points out that the level of proficiency in Sweden in these subjects has decreased over the last few years compared to other countries.

“Our entire society is built on taking in and interpreting textual information, so there is a risk that differences between individuals will increase,” Rosén told The Local.

In order to combat this it will be important for schools to recognise the problem and adapt the curriculum accordingly. But parents have a responsibility too.

“Sweden is a great literary country both when it comes to children’s and adults’ books. We are their role-models and we can choose to pick up a book every now and again,” she said.