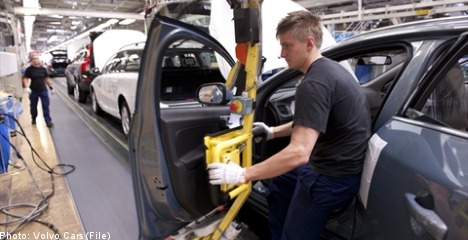 Volvo’s 2010 profits amounted to a an improvement of 7.5 billion kronor from 2009, the year that former US-based owner Ford brokered a deal to sell the then loss-making Swedish carmaker to China-based Geely.

“Now we’re readjusting, from defense to offense in all areas,” he told news agency TT.

Results continue to look good for Volvo in early 2011.

During the first quarter, the company turned a profit of 640 million kronor, which is an improvement of no less than 78 percent compared to the same period in 2010.

All regions have also reported an increase in sales volume.

“This is the fifth quarter in a row that we’ve shown profits. But we are vulnerable. We’re still like a small flower, dependant on several factors in our surroundings, and it will be some more years before Volvo is sustainably profitable,” Jacoby said.

He forecast some major investments during coming years, which may put Volvo under strain. Jacoby couldn’t promise that profits would continue for the rest of the year, remaining in his predictions for car sales in 2011.

“We see some possible storm clouds. Among other things the rising price of raw materials, and the strong Swedish krona, so I can’t promise continuing profits for the rest of the year, as we continue to grow,” he said,

“This is very good news. We had so much work when Volvo was in trouble. And at the same time, that showed that a strong commitment from the company, a strong financier with the muscles to develop both production and sales, is necessary. I also believe that the access that has been granted to the Chinese market has given the company an energy injection,” she told TT.

“Both management and employees have put in a great deal of work to reach this result, and I congratulate them,” concluded Olofsson.