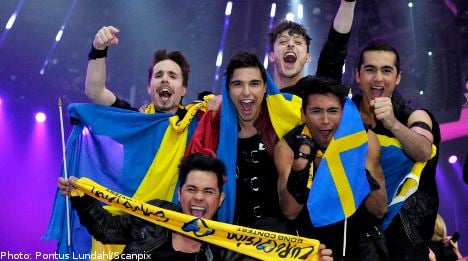 Saade helped to restore some pride after the fiasco of 2010 when Sweden fell at the semi-final hurdle of the pan-European song fest.

The hopes of Saade and his legions of Swedish followers however hung in the balance as the last of the finalists were read out. Sweden was the final country to be called, after a wait described by Saade “a nightmare”.

“It was damn nightmare to sit there and wait for the final envelope. I sat with my head in my hands and thought, ‘I can’t cope, I can’t cope’,” he said after the drama had reached a happy ending.

20-year-old Saade, from Helsingborg in southern Sweden and his club hit “Popular” will now take its place alongside the other 24 competitors performing in the Dusseldorf Arena on Saturday evening.

Sweden has overhauled its domestic Eurovision qualifiers in a bid to reverse the poor fortunes of recent years, with Eric Saade one of a group of artists hand-picked in a bid to boost quality.

The country has not placed in the top ten since 2006 and Anna Bergendahl’s failure to qualify for the 2010 final with “This is my life” in 2010 signalled a low point in Sweden’s distinguished Eurovision history.

Saade has been confident of his chances when speaking to the media and on Saturday at 9pm the nation will be glued to their television sets hoping he can deliver on his promise of a return to the Eurovision song summit.