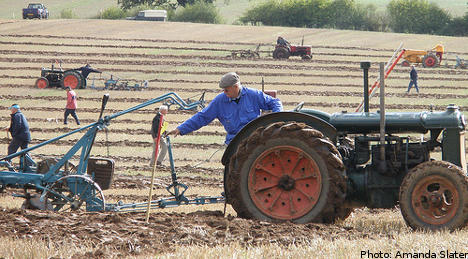 Competitors representing a slew of different nations will flock to Östergötland in central Sweden to plough Sweden’s soil in the various categories that make up the competition, and the cultured art of ploughing a perfect field.

Ploughers compete in two categories – conventional and reversible* – and display a specialisation honed from years of practice on the home fields.

“They’ve trained for years. I mean, you have to be the national champion in your country to compete in the world championship… So, it’s many, many competitions and many, many hours to get as far as this,” WRC project manager Annika Altnäs tells The Local.

This year’s event, to be held May 13th-14th at Lindevad’s Manor in the rural county of Östergötland, will feature 58 competitors from 29 nations, including Australia, England, Kenya, Macedonia, Sweden, and the United States.

While the ploughers are judged on a set of precision criteria based on the straightness, evenness and depth of their trench, Annika Altnäs, explained that there is a greater significance to the competition than digging furrows.

First held in 1953, the World Ploughing Championship (WPC), emerged in a world still reeling from the effects of WWII and the challenge of feeding a world devastated by conflict.

“Farmers all over the world, especially those in Europe at that time, joined in a peaceful action to be head of and have a brotherhood to work, improve and produce food,” Altnäs says.

The competition keeps that post-war spirit alive, she adds:

“To symbolize the production of food for everybody…for something that everybody needs.”

She explained that concerns over global food production remain relevant today and the annual exchange of a “Can of Peace” to the host farm serves to remind contestants and spectators of the competition’s origins.

“Everybody in the world needs to eat and somebody has to produce it.”

Despite the broader implications, the practice of ploughing remains very much a precision exercise and the secret to success is a closely guarded secret, Altnäs explains.

“I think they all have their secrets, like all sportsmen. This is a sport. Like, how do the best tennis players perform the best backhands? That’s the same kind of question.”

While Annika Altnäs is the first to admit that competitive ploughing isn’t necessarily what some would consider the most riveting spectator sport, after attending numerous ploughing competitions over the past few years, she has come to have a deeper appreciation for the ancient art of digging a shallow trench.

And what does the winner ultimately receive for the countless hours he or she has spent toiling with tractor and soil to develop this skill?

“A trophy that goes to a new person and country every year… It’s like a sculpture of a man with a plough, an old-fashioned plough… some countries, they have sponsored prizes… But you won’t become a millionaire, no.”

Sweden has a long involvement in the history of competitive ploughing, hosting its first agrarian showdown as far back as 1836.

While back then competitors deployed horse-drawn ploughs, the 2011 event will be a far noisier affair with the hum of powerful tractor engines replace the grazing steeds of yore.

*Conventional ploughing, still used in 85 percent of farm production today, is the old-fashioned method of ploughing in which a plougher must turn with his or her tractor and make wide circles in order to change direction.

Reversible plowing, a more modern technique involving complicated technology, however allows the plougher to simply switch the direction of the plough on the tractor itself, avoiding the hassle of turning.