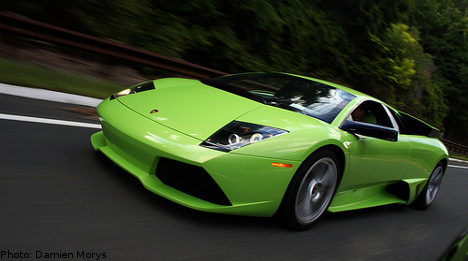 Aftonbladet reports today on a driver, named only as Jonas, who managed to wreck a 2.2 million kronor ($345,000) Lamborghini on what is often perceived to be the unluckiest date of the calendar.

The driver, who works for an event company that hires out luxury vehicles, was taking the exclusive sports car for a spin on the outskirts of Stockholm city centre on Friday afternoon. With heavy rain falling on roads that had been basking in sunshine for several days, conditions were dangerous, as he was about to find out.

After stopping at a red light the driver accelerated and lost control as the car skidded off the road. Luckily, nobody was injured in the accident, but the car, a Lamborghini Murcielago LP640, was crushed and looks like it will have to be an insurance write-off.

With a price tag of over 2 million kronor even in secondhand condition, the Murciélago, “Bat” in Spanish, is the flagship model of the exclusive carmaker.

The driver meanwhile said, “I do not think it (the date) had any significance, stuff always happens on Fridays.”