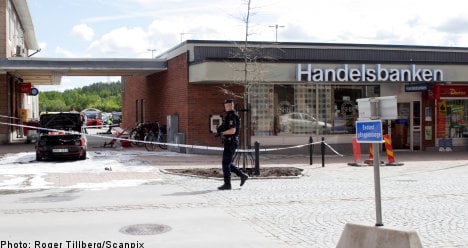 According to local police, one of their vehicles came under fire in connection with the robbery but there are no reports of any officers sustaining injuries.

“They shot with a machine gun at the police unit which arrived at the scene in a vehicle. The vehicle was hit, but there are no details regarding anyone having been injured,” Elin Almqvist of Södermanland County police told the TT news agency.

Almqvist said that reports indicated that four men hit the branch. A burning car has been found near Vallmotorp on route 56 near Katrineholm. Police suspect that the car could have been the robbers’ getaway car and it will be examined by a forensic specialists.

The hunt for the robbers is ongoing, with police deploying a helicopter and setting up roadblocks in the area.

A nationwide alert has also been issued, and special operations teams of the police’s National Task Force (Nationella Insatsstyrkan) have been called to join participate in the effort.

A further car was also found to have been set alight in the vicinity of the bank during the course of the robbery, according to Almqvist.

“I heard the shots and staff from the bank came into my store and screamed that it was a robbery. They were shocked, and when I looked out I saw a masked man with a machine gun standing outside the bank,” said one woman who runs a store in the vicinity of Handelsbanken.

Almqvist said that the police are treating the robbery as an isolated incident.

“This means that it is this (case) that we are working on now,” she said.

According to the police the robbers fled Flen, located around 110 kilometres south-west of Stockholm, in a silver-coloured Volvo heading north.

Police received an alarm about the theft at 9.38am on Wednesday morning.

It remains unclear whether or not the robbers made off with any loot, but a witness told the local Eskilstuna-Kuriren newspaper that he saw one of the masked men come out through a window in the back of the bank holding a bag.