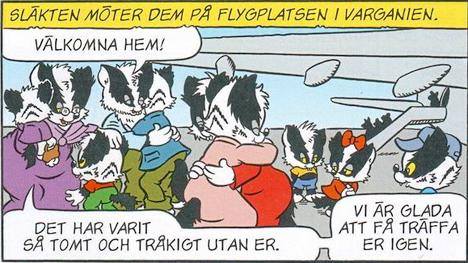 In November of last year, the Swedish Migration Board (Migrationsverket) announced plans to enlist Bamse, “the world’s strongest bear”, as part of an information campaign aimed at asylum seeking children in Sweden.

However, the special edition of the Bamse comic book has sparked a storm of criticism, with detractors alleging in internet debates and on social media sites that Bamse has “sold his soul” and that the story is “airbrushed reality”.

In the Helsingborgs Dagblad (HD) newspaper, culture reporter Mattias Elftorp writes in an opinion article entitled “The world’s dumbest bear” about one of the special editions in which an asylum seeking wolf who has his application rejected is met by happy family members upon returning to his homeland.

“In the last frame, the whole family is happy and it’s hard to miss the message: it’s probably better in the end to be sent home than to get asylum and no harm will come to those who the Migration Board has decided don’t have grounds for asylum,” writes Elftorp.

In another one of the special Bamse editions, Skalman the turtle tells asylum seeking children what to do when they get a stomach ache due to concerns about the asylum process.

“The cure is to go to school, play outside, and meet friends, as if the problem was a lack of fresh air for these children and not a threatening situation in their life,” writes HD.

The Migration Board had intended the special editions of Bamse to allow “adults close to the children to explain the asylum process with help” from the comic book.

The comic books, which are aimed at children ages 5 to 12, were produced in cooperation with publisher Egmont Kärnan and translated into five different languages.

A number of refugee aid organisations and agencies were also involved with the comic books’ production.

Ola Andreasson, head of Bamseförlaget, the company that owns the Bamse trademark, and son of Bamse creator Rune Andreasson, doesn’t understand the criticism directed at the special editions of Bamse.

“In the story, one of the children stays while the others must return [to their homelands]. When you’re talking about the asylum process with children, it’s certainly appropriate to explain that this is how things can end up,” he told media trade publication Dagens Media.

Speaking with the TT news agency, however, Andreasson also acknowledged that having Bamse illustrate the asylum process could be seen as a tacit support for Sweden’s current asylum policies.

“Yes, it’s clear it could be construed as such, but that’s not something to fear, you can’t stick your head in the sand,” he said.

“I think it’s right for Bamse to provide information about everything.”