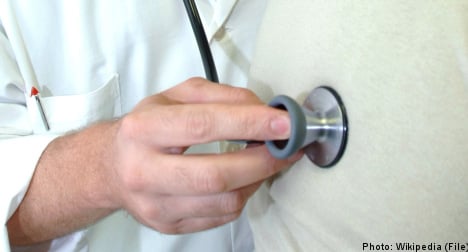 The Linköping pathologist has been able to continue working at the hospital despite the reports that he failed to detect cancer in several patients.

However, following the discovery of a similar case in Gothenburg, the hospital offials have decided to re-check all of the doctor’s diagnoses dating back a year.

“We can’t just sit idly by and say ‘this just applies to them’. We don’t think we have the same problem but as we aren’t completely certain, we think there is reason to check it out,” Christer Andersson, head of medicine at Linköping hospital, said to local paper Östgöta Corresondenten.

Marie Wedin, of the Swedish Mecal Association (Läkarförbundet), does not want to comment on individual cases.

“But every hospital head is responsible for ensuring that the hospital’s doctors have the proper training and are healthy and able to carry out the work that they are hired to do,” she told news agency TT.

Wedin also pointed out that the assessments made by the pathologists are always just assessments, and can never be a 100 percent accurate.

“The main thing is to create procedures so as to minimise mistakes, “ she said.

According to a report released last autumn by the Swedish Cancer Society (Cancerfonden), Sweden is in need of 291 full-time pathologists.

The Linköping doctor is retired but comes in to cover shifts at the hospital.

Despite the fact that he has been reported seven times, the hospital has not suspended him and they will only re-check test results dating back a year.

“What we have done is to limit the doctor’s work so that he no longer works with prostate changes and when it comes to tumours of the skin we have the policy now that these should be looked at by two specialists,” Andersson said to ÖC.

According to Wedin, the shortage of pathologists is forcing hospitals to rely on procedures that are less secure.

“You can’t let people wait months for cancer results, so the question for the managers is how many times results should be double checked,” Wedin told TT.

The National Board of Health and Welfare (Socialstyrelsen) has put the case in Gothenburg under review, according to Lex Maria, the informal name used to refer to regulations governing the reporting of injuries or incidents in the Swedish health care system.