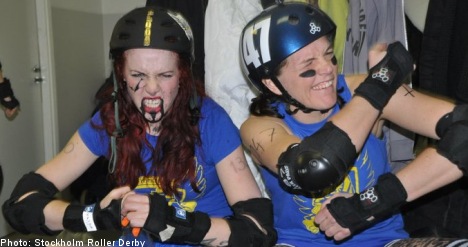 The threat of violence hangs menacingly in the air. Blood flows freely, wounds are attended to and physical injuries are shown off as badges of honour.

But this isn’t a football terrace or a smoky backroom mafia joint, it’s an all-female roller derby match between Malmö’s Crime City Rollers in their first ever “bout”, against their rivals from the capital, Stockholm Roller Derby.

Inspired by punk, rockabilly and burlesque, with a heavy dose of aggression thrown in for good measure, roller derby is a sport on the up.

“Like with all sports, to be good at it takes a lot of training, but you have to dare to take blows, know it is sometimes going to hurt, and be prepared to do the same to your opponents” says Emmelie Bogårdh or “Countess Blood” of Stockholm Roller Derby.

One of the fastest growing female sports, to the outsider it is a mix of skill, speed and aggression, a kind of Rocky Horror Picture show on wheels.

To those involved, it is more than a sport, it’s a lifestyle.

“First and foremost it’s fun. It’s full on, fast-paced and hard, but also not important to win at all costs. On top of that you get to meet loads of new friends and widen your social circle,” Bogårdh explains.

“Grrl power” may be the first impression you get but there is more to it than that – seldom these days do you see females actively involved in contact sports, while the proponents of the game point out that it gives them a chance to express themselves individually as well as enjoy the camaraderie of the team.

This is key, and image is everything. From the nicknames to the generously applied warpaint, these girls send out a tough streetwise message: “mess with us at your peril”.

To the uninitiated, roller derby could equally be described as is a relay-race on roller skates, or all-female rugby without the ball.

This American-invented full contact sport, (with emphasis on the “contact”), is played around an oval track. Each team has 5 members – 1 Pivot, 3 Blockers and 1 Jammer. The aim is to get the Jammer past a member of the opposing team and hence gain points.

Originating in the United States in the 1930s, roller derby became a recognised sport during the sixties and has since spread rapidly, with leagues in Australia, Belgium, Canada (which will host the World Championships in December), Denmark, Finland, Germany, Ireland, the Netherlands, New Zealand, Switzerland, the United Kingdom and of course, Sweden which boasts teams from six cities: Stockholm, Gothenburg, Malmö, Umeå, Luleå and Visby.

The girls all have their own suitably aggressive nicknames: Misty Muffdiver, Venomous Violet, Go Go Rillah, Cookie Hoe and Vix Viking leave little to the imagination or their motivation.

This is no place for shrinking violets.

At first they practiced in a car park, but progress was slow and just when things were looking like never really taking off, along came Drew Barrymore to save the day.

In the actress’s 2009 directing debut “Whip It”, she plays a misfit in Texas, who finds a way of dealing with her small-town misery after she discovers a roller derby league in nearby Austin.

This started the ball rolling so to speak, and thanks to the strong DIY ethic, the power of social networking and the spreading of Youtube clips, the sport has started to boom.

Last year over 200 players from all over the world gathered in London for an event, and there are now more than 23,000 registered participants globally.

Bogårdh says she is typical of the current generation of players.

Always active as a kid she lost enthusiasm for more traditional sports as a teenager, but found herself attracted to roller derby.

“I came along and felt this was right for me. Cool chicks and a great subculture, it suited me down to the ground,” she explains.

As Bogårdh and her fellow roller girls prepare to lace up their skates for a home match against visiting German side Hamburg Harbor Girls on Saturday, May 21st, image and subculture will certainly be on display.

“There is no obligation to come up with your own name and image, but it is about ‘going the whole way’, and this is important,” she says.

“You get to go on to the track as your alter ego and maybe that helps you be a bit more daring than you would normally be in life. I love this side of it, where you can be a little crazy and live out some of your hidden fantasies.”

Stockholm Roller Derby takes on the Hamburg Harbor Girls on Saturday, May 21st at Visättrahallen in Huddinge, south of Stockholm. Doors open at 6pm and tickets range from 59 to 100 kronor. Check out the website below for more information.