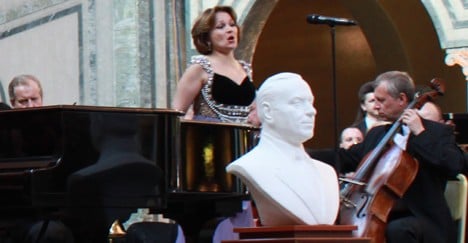 Azerbaijan has had ample reason to celebrate in the past few weeks – and the cultural ties of the republic in the South Caucasus with Sweden have been heavily in focus.

Last week, the country’s entry won the Eurovision Song Contest in Düsseldorf. The song, Running Scared, was performed by Ell and Nikki and written by a Swedish songwriting team.

In Stockholm last week, however, a more classical strain of Azerbaijani music was on display. The concert in Stockholm City Hall celebrated the 20th anniversary of Azerbaijan’s independence from the Soviet Union, and gave Swedes and other guests the chance to experience a rich musical heritage.

The concert was performed to an invited audience, including Swedish members of government and parliament, other public figures and Azerbaijanis living in Sweden. They enjoyed a programme of music by prominent 19th and 20th century Azerbaijani composers.

Watch a clip from the concert here – ‘Song about mother’ composed by Seville Aliyeva, daughter of the late president Heydar Aliyev:

Stockholm City Hall, best-known internationally as the scene of the annual Nobel Prize Banquet, provided a location of suitable gravitas for the occasion.

Prior to the concert, Azerbaijan’s Ambassador to Sweden, Rafael Ibrahimov, spoke of the huge pace of development the country had experienced since independence, with increasing prosperity and a diversifying economy.

Among the soloists performing during the evening were Azer Zeynalov, an award-winning Azerbaijani singer and painist Farhad Badalbayli, dean of the Azerbaijani State Philharmonic Society.

Article sponsored by the Embassy of the Republic of Azerbaijan, Stockholm. 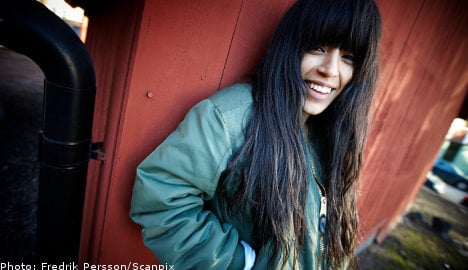 “Their stories move me. It’s something I can relate to,” Loreen told national newspaper Expressen.

Swedish singer Loreen is in Baku, the capital of Azerbaijan, as the Swedish contestant in the annual European Song Contest, set to hypnotize viewers across the continent with its glitter and glamour next Saturday, May 26.

However, there’s more to her visit than a song-and-dance performance.

Azerbaijan’s hosting of the European Song Contest has been debated, as the country has been criticized by several human rights organisations.

According to organisation Human Rights Watch, press freedom is very limited, as are public protests, religious groups are restricted, and torture and ill-treatment in police custody occurs unpunished.

On Friday, Loreen visited a women’s shelter, and told them her own story from her childhood years in Morocco.

“My cousin was married off when she was 13, to a 40 year-old man. The same might have happened to me if my family had stayed in Morocco,” she told Expressen.

Through visiting the women’s shelter, Loreen hopes to be able to help their situation and raise awareness.

“It was important for me to tell them that sticking to your dreams is important, no matter what. Otherwise we can never achieve change,” she said.