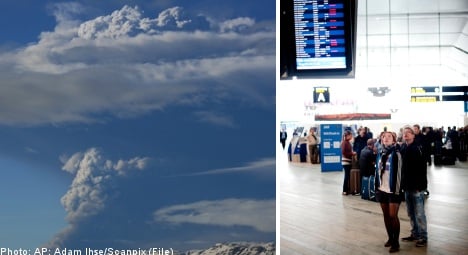 Both domestic and foreign routes scheduled for Tuesday night and early Wednesday morning will be affected, according to TV4 news in Gothenburg.

According to the latest forecasts, the ash cloud is set to reach parts of southwestern Sweden on Tuesday evening and spread further toward the northeast during the night and into Wednesday morning.

“A high concentration of ash is going to create a swath between Landvetter and just south of (Stockholm airport) Arlanda at 2am tonight. No planes will be allowed to fly there,” Lars-Eric Blad of the Swedish Transport Agency (Transportstyrelsen) told the TT news agency.

As the flight ban will likely be limited to the nighttime hours, the only flights expected to be affected are postal flights and other air traffic to and from Landvetter.

For the time being, Arlanda is outside the restricted zone.

Airport operator Swedavia, which operates 11 airports in Sweden including Landvetter, said on its website Tuesday night that additional cancellations could occur at other airports run by the company.

“We encourage travelers to keep themselves updated on the situation and contact their airlines regarding information about their own trips,” said Swedavia.

The Transport Agency decided on Monday that restrictions would be put in place as soon as the ash cloud reached Sweden.

The restrictions have three levels: low, medium-high, and high concentrations of ash.

Scandinavian airline SAS said it has only been marginally affected by the ash cloud, but several flights from Norway and Copenhagen to Scotland have been cancelled.

“In Sweden, the effects are the same today as they were on Monday. Flights from Stockholm to the United States have a somewhat longer route,” SAS spokesperson Malin Selander told TT.

SAS requested and was granted permission in Norway to fly in so-called “gray ash zones” with medium-high concentrations of ash.

The company expects to be able to maintain more or less normal air traffic during the evening, according to Norwegian news agency NTB.

SAS also received permission to fly in areas over Sweden and Denmark with medium-high ash concentration, according to the decision.

Tour operators have also only been slightly affected so far.

On Tuesday night, a Fritidsresor flight from Las Palmas scheduled to land at Landvetter was redirected to Malmö instead.

“We can’t forget that today there is a totally different readiness within the airline industry to be able to fly, even when there is ash,” said Lottie Knutsson, a spokesperson with Fritidsresor.