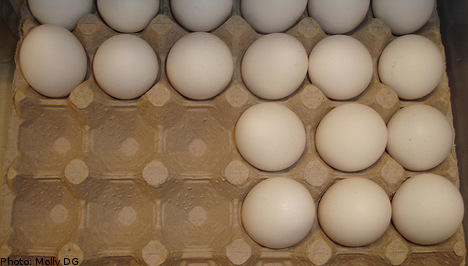 “To make it worse the youth was allergic to eggs and got very red eyes,“ said Gothenburg prosecutor Per Lind to the Expressen daily.

Halloween celebrations in Gothenburg got out of hand last year when a group of trick-or-treating kids decided to throw eggs at a house in a residential area of Lerum.

The house owner, a 35-year old man, had had enough of the pranks and was none too pleased over the rough treatment of his property.

So when his patience finally broke he pursued the pranksters, and after getting hold of one of the boys’ rucksacks, snatched his eggs from him and smeared crushed egg all over his face.

Trick-or-treating and celebrating Halloween are fairly new traditions in Sweden. According to experts on popular traditions at the Nordic Museum in Stockholm, the American custom didn’t really catch on until the late 1990’s.

Prosecutor Per Lind told Expressen that ‘egging’ houses is a new but common tradition at Halloween in the area and there are many residents who are getting fed up with it.

“Many readers will probably feel sympathy with the perpetrator in this case,” he said to Expressen.