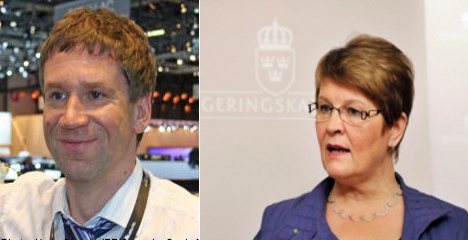 The meeting took place on Tuesday evening at the enterprise ministry in Stockholm, five days after the government received his letter expressing the wish to meet.

“It was a good meeting. Always good to meet people about which so much has been written,” Maud Olofsson said.

The meeting however had no impact on the government’s decision process regarding European Investment Bank (EIB) loans to the trouble car maker.

“We are waiting on GM and EIB,” Olofsson said.

A couple of days prior to Antonov’s request for a meeting, the Russian financier’s Swedish spokesperson, Lars Carlström, accused the Swedish government of having a “hidden agenda” in favour of Saab being closed down.

This was an issue that Maud Olofsson brought up during the hour-long meeting.

“I maintained that it is better that those in charge make statements and not others. It is important that those who speak know what they are talking about. It is difficult to argue that the government has been passive with regard to the automotive industry,” she said.

Olofsson was keen to stress that the meeting was an information exchange and not intended as a means to develop a position for or against Antonov.

“He wanted to talk about his thoughts about Saab and Saab’s future and why he is eager to step in and invest money,” Olofsson said.

“He is a businessman. Entrepreneurial. He was pleasant,” Olofsson added.

Olofsson is due to meet with representative from Saab’s Chinese partner Pang Da on Thursday.

“As they will remain in Stockholm during the afternoon it will be easier to find time for meeting than if it would have required a trip to Trollhättan,” said Håkan Lind at the Ministry of Enterprise to news agency TT.