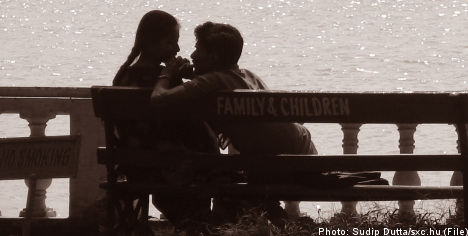 “I suppose it shows a ‘big city’ culture, a different lifestyle, where there is a greater chance of meeting people,” Gunilla Neves Ekman, head of the sexual health unit at the Stockholm County Council, said to The Local.

A total of 3,317 young people in Stockholm answered questions in the survey, which was part of a larger study mapping out the sexual habits of the country’s 15- to 29- year olds.

According to the study, most young people in Stockholm youth described their last sexual encounter as exciting, sexy and loving, the Svenska Dagbladet (SvD) newspaper reported.

Only 8.5 percent described their last intercourse as a failure, while an additional 2 percent said it was something they never wanted to do again.

In addition, 20 percent of Stockholm women and 24 percent of men last had sex with a “new or temporary connection”.

For the whole of the country these numbers were 17 percent and 20 percent, respectively.

But despite temporary liaisons being so frequent, only one in four young Stockholmers stated that they had used a condom, a number slightly lower than for the rest of the country.

According to Neves Ekman, it is imperative to bring the condom to the forefront of the discussion and make the benefits more visible.

“We work with campaigns and on the internet and in schools. We also give out condoms at events and festivals. We think it is important that condoms can be found near where teenagers are,” she told The Local

A drive to promote condoms in Stockholm will be launched in June when over 50,000 condoms will be given out to the city’s young.

While it isn’t always easy to change this kind of trend, Neves Ekman thinks it is a question of feeling secure with the practical use of condoms and speaking about them with your partner.

“We know that they have the knowledge and that they are positive to condoms, but the problem is making them actually use them in practice,“ she said.

Overall, 15,000 young Swedes between the ages of 15 and 29 took part in the so called Ungkab 09 survey, answering questions regarding their sexuality carried out by Gothenburg University.