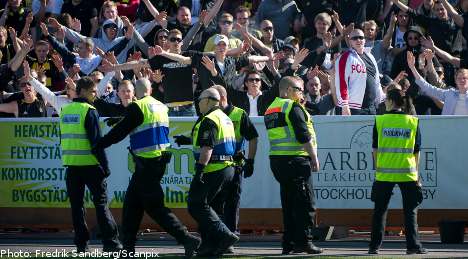 “A new law is needed fast,” the Riksdag’s justice committee chairwoman Kerstin Haglö of the Social Democrats wrote in a statement on Friday.

In an interview with the Expressen newspaper, party leader Håkan Juholt, professing himself as a “keen football supporter”, suggested even tougher measures to combat hooliganism.

“Put more surveillance cameras in football stadiums, make sure that convicted hooligans are required to report to police stations, or that they have a curfew in place during the matches,” he told the newspaper.

“And if they don’t follow the duty to report or the curfew, they should pay a higher penalty. We have got to take a tough line. No more commissions, talk, or more study circles, but instead we need to give the police more muscle so they can see that hooligans don’t get inside arenas,” he continued.

The government has appointed Per Unckel, the county governor of Stockholm, as a national coordinator for anti-hooliganism but have given him two years to prepare a proposal on how to deal with the situation.

According to the Social Democrats this is too long. They want the Riksdag to instruct the government to present a proposal for this autumn, so it will be in effect in time for next football season.

But the government is not in favour of the proposal. New legislation is not the solution to hooligan violence, according to Lena Adelsohn Roth, minister for culture and sport.

“We have laws against what has happened in Sweden recently. The problem is that these are not enforced. Blacklisted fans still get into the stadiums,” she said to news agency TT.

Adelsohn Roth shares the view of the clubs that the major problem today is the difficulty clubs experience in identifying blacklisted fans and denying them entry to the events.

Stockholm club Djurgården has recently sent in a request to the Swedish Data Inspection Board (Datainspektionen) to allow them create an image bank of blacklisted fans to combat the problems.

The Christian Democrats, Centre Party and Liberal Party have previously suggested that hooligans be required to report to police, but had mixed reactions toward the Social Democrats’ proposal.

Both the Left Party and the Green Party welcomed the initiative, however, while the far-right Sweden Democrats also expressed support for the idea, while stressing the importance of seeking broader initiatives to combat hooliganism.

“There are other proposals which are more important, for example having clubs receive lists of people who aren’t allowed in,” said Sweden Democrat MP Kent Ekeroth.