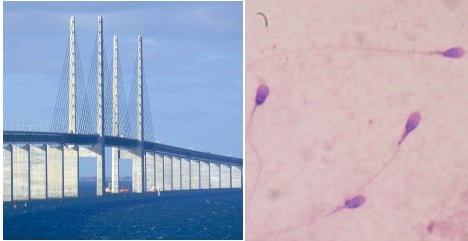 According to Peter Bower, the CEO for Nordic Cryobank, it is highly probable that Swedish women have received sperm from the affected donor.

“It is very likely, considering how many women come to Denmark for insemination,” he said to news agency TT.

So far at least nine children that have been conceived with the help of the man’s sperm developed genetically inherited disorder Neurofibromatosis (NF1 or von Recklinghausen disease).

Neither the sperm bank nor the young man was aware that he carried the rare and potentially dangerous disease that can cause grave disabilities.

If one of the parents carries the gene the risk that the child is affected is 50 percent. In Sweden it’s estimated that one in a thousand carry the gene for NF1.

Bower did not want to speculate into how many Swedish women or children may be affected.

“We have delivered this man’s sperm to 10-15 Danish clinics, but to what extent they have used it I have no idea,” Bower said to TT.

According to the Danish authority that regulates the sperm banks, this is not a separate incident. Specialist physician Anne Cathrine Bollerup said to news agency TT that they often get reports of genetic diseases spread through sperm donation.

Following the discovery, the chairman of the Danish Council of Ethics, Jacob Birkler, is calling for a tougher control of sperm banks and more screening of the donors after the recent discovery. But council member and physician Lotte Hvas was sceptical.

“You can safeguard against diseases like HIV and Hepatitis but you can’t expect donors to be genetically tested against everything,“ she said to the Danish Jyllands-Posten daily.

That donated sperm carries a defect is not in itself a unique occurrence and it could just as easy have happened in Sweden, according to Magnus Nordenskjöld, professor of clinical genetics at Stockholm’s Karolinska Institute.

“However carefully you choose your man, you can’t ever be sure. It is the same with donated sperm – one can never be completely certain. The sperm is no different just because it has been in a test tube,” said Nordenskjöld to TT.

However, according to Elin Siljehag at the National Board of Health and Welfare (Socialstyrelsen) Sweden has very extensive regulations on the screening of donors. They are tested against HIV, Hepatitis and Syphilis. Any known genetic defects in the family are also investigated.

“The background of the donors is checked very thoroughly and if there are any indications that someone is found to belong to a group which may be more likely to carry a certain disease they will be screened specifically for that,” she told The Local.

According to Siljehag, these extensive checks should ensure that donated Swedish sperm is of the highest quality.

But if a donor doesn’t know he has a genetic defect there is always a risk that a potential child could develop symptoms.

“There are almost 8,000 genetic diseases. Theoretically you could test for all of these, but it would hardly be worth it. Everyone knows that there is a risk. It is part of life,“ Magnus Nordenskjöld told TT.