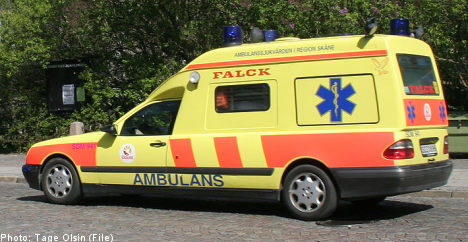 The woman, who had fallen down in her home, contacted her home-help service through her security alarm. According to the nurse that was called out, she didn’t have any noticeable injuries but was experiencing difficulties urinating.

After being helped by the nurse with a catheter in the evening, one of the woman’s relatives phoned up again early in the morning on the following day, explaining that she still had problems peeing.

The woman was then advised to phone her nearest medical centre to have her complaint diagnosed. But the relatives saw that the woman was getting worse and phoned for an ambulance instead.

It wasn’t until the third attempt that she was taken seriously. After a while the relatives used the security alarm to find out why the ambulance had not arrived, but were told by staff there that they are not connected to SOS alarm, Sweden’s emergency response service.

After not hearing anything more, the municipality security staff thought that the woman had been helped. At 10.32am they got a call from agitated ambulance personnel wondering why she hasn’t received any help.

The woman was by then in a critical condition.

According to her relatives she had deteriorated quickly during the morning. She died in hospital later the same afternoon.

The incident has now been reported to the National Board of Health and Welfare (Socialstyrelsen) in accordance with Sweden’s Lex Maria, the informal name used to refer to regulations governing the reporting of injuries or incidents in the Swedish health care system.

According to the report, the woman’s case was being juggled between the municipality home security system, the home help service and SOS alarm. Why the ambulance took four calls to come out remains unclear.

Sweden’s emergency response service SOS Alarm has recently been put under review by the health board following a man’s death after he was refused an ambulance and a series of other recent cases deemed to endanger the welfare of patients.