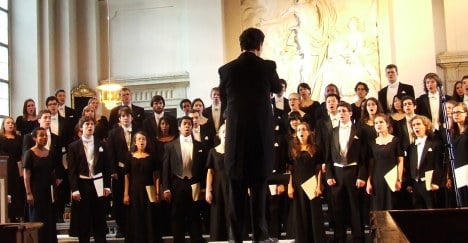 The stately harmonies of the Yale Glee Club filled the halls of the Adolf Fredrik Church in Stockholm on a recent evening.

The performance is one of four Swedish concerts the prestigious singing group gave as part of a European tour retracing the steps of the choir’s landmark 1928 tour which helped the group gain recognition as one of the first American singing groups to tour the Scandinavian countries and Germany.

“That’s what brought me here the first time and I’m glad to be back. We had a good crowd in Uppsala and it’s been a lot of fun so far.”

In the spring of 2003, Douma was one of only two North American conductors invited to compete for the first Eric Ericson Award, an international competition for choral conductors, advancing to the semi-final round and appearing in Uppsala and Stockholm.

Having directed the Yale Glee Club for the last eight years, Douma is thrilled to be back in Sweden as a part of the group’s anniversary tour.

“We’ve done a lot of special projects this year and this is the last special one and it’s very significant as we’re going back to the same places the group visited on their very first international tour,” he explains.

The last time the Glee Club visited Sweden in the 1920s they were presented to the Crown Prince and Queen at the Royal Palace and were also greeted by many other royal families during their tour around Europe.

A German newspaper at the time called the ensemble, an “American phenomenon”.

After a few concerts in Uppsala earlier this week, one of them in Uppsala Cathedral, the Glee Club ended their visit in Sweden by playing a free concert in Adolf Fredrik’s Church in Stockholm on Tuesday night before moving on to Denmark.

The group consists of a mixed chorus of 85 men and women, made up by students from all academic disciplines at Yale University, located in New Haven, Connecticut on the east coast of the United States.

The Glee Club is the third oldest collegiate chorus in the United States, and one of the most travelled choruses in the world, having visited six continents since they were founded in 1861.

According to the New York Times, the Glee Club is “one of the best collegiate singing ensembles” known for their “harmonic precision”.

The club’s repertoire embraces a broad spectrum of choral music from the 16th century to the present, including Renaissance motets, contemporary choral works, world folk music, and traditional Yale songs.

The summer’s tour programme includes sacred music from composers from all the countries the club is visiting on their tour.

The group’s performances in Sweden even included a few songs sung in flawless Swedish, including works from renowned composer Waldemar Åhlén, one of the leading organists of his generation.

And spectators in Adolf Fredrik’s church were treated to a powerful and moving performance, fitting for the church’s stately environs.

After Sweden the tour continues to Denmark, Czech Republic, Germany and France where they will perform at the notorious Notre Dame Cathedral.

The group’s last performance will be in Istanbul on June 18th.