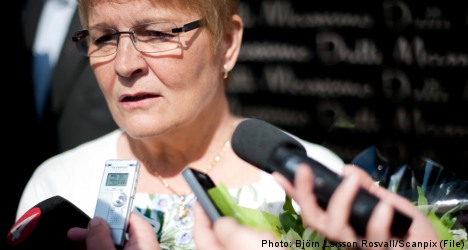 Kristianstad’s Centre Party want Olofsson to resign, and a successor to be elected at the party’s conference this coming fall, reports newspaper Norra Skåne.

“We need someone else who can take on this responsibility,” he says.

Maud Olofsson took over after previous Centre Party leader Lennart Daléus just over ten years ago. Since her succession the party has enjoyed high results. In the 2006 election the Centre Party became the third largest in Sweden, and formed a government with the three other conservative parties.

Support has dwindled since then however, and following the latest election, the Centre Party is only the fifth largest party.

This isn’t the first time voices are heard demanding Olofsson’s resignation. MP Fredrik Federley and the Centre Party’s youth organisation are among those who have suggested it earlier.

However, this is the first time such a demand is made from a united municipality department.

“We may be the first, but we know that many others are watching us, and agree with this,” says Sven Nilsson.