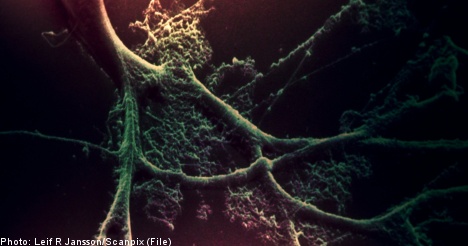 “This fundamentally changes how we look at mature cells and their capacity. Previously a skin cell was thought to always remain a skin cell, but we have shown that it can be any cell,” said Malin Parmar, the Lund University researcher leading the study, to The Local on Tuesday.

The new technique works by reprogramming connective tissue cells, so-called human fibroblasts, directly into nerve cells, opening up a new field with the potential to “take research around cell transplantation to the next level”.

Parmar explained that members of the research team were surprised at how receptive the fibroblasts were for new instructions.

“From the beginning this was mostly an experiment that was fun to try out. But fairly quickly it was shown that the cells were unexpectedly receptive to instructions,” she said.

Parmar told The Local that the team hopes that their work could help to tackle diseases such as Parkinson’s and help to avoid the ethical complications of using foetal stem cells.

“It could be used to assist in the treatment of Parkinson’s, or any other type of neuro-degenerative disease. It provides an alternative to stems cells,” she said.

“Furthermore it allows for the use of a patient’s own cells to study the specifics of their condition in a Petri dish – limiting the potential for adverse reactions.”

Before the technique is used in clinics more research is required into how the new nerve cells survive and work in the brain, but the goal in the future is to enable doctors to develop the brain cells a patient needs from a simple skin or hair sample.