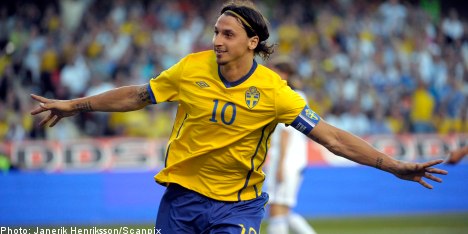 “It feels great. Three goals, an assist and we won – that’s the most important,” Ibrahimovic said at a postgame press conference.

Despite starting the game on the bench due to concerns about an injured foot, the AC Milan star came in as a substitute in the 25th minute and quickly made his mark

Six minutes after stepping on to the pitch, Ibrahimovic collected a feed from Kim Källström and sent a thundering shot past Finnish goalkeeper Anssi Jaakkola, giving Sweden a two goal lead.

A few minutes later, Ibrahimovic found himself alone in front of the Finnish goal after a nifty feed from Sebastian Larsson and had no trouble scoring Sweden’s third goal of the half.

But the big Swede wasn’t finished.

In the 53rd minute, a free kick by Källström sailed over players in the penalty area, including a helpless Jaakkola, who could only watch as Ibrahimovic headed the ball into the back of the net, giving Sweden a more or less insurmountable 4-0 lead against the shell shocked Finns.

In the closing minutes, Ibrahimovic sent a pinpoint pass to teammate Emir Bajrami, who ended the onslaught of Swedish scoring by deftly chipping the ball into the net.

The victory gives Sweden a total of 15 points in Group E of the Euro 2012 qualifying rounds, three points behind group leading Netherlands, while third place Hungary has 12 points.

“We take one match at time. We get better every time we meet,” Ibrahimovic said after the match.

“These last two matches have worked really well and we’ve won the matches. That’s what we want to do.”